In overture to Fatah, Hamas agrees to dissolve its governing body in Gaza

Hamas also consents to PA to taking over Gaza and holding elections; Fatah welcomes Hamas announcement, but says it needs to confirm its veracity. 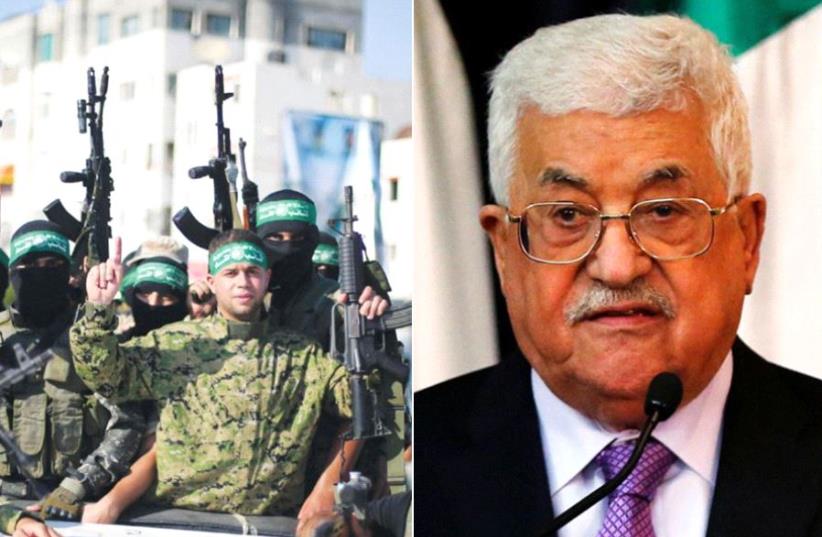 Hamas members and Abbas
(photo credit: REUTERS)
Advertisement
In an overture to its rival Fatah, Hamas agreed on Sunday to dissolve its governing body in the Gaza Strip, allow the West Bank-based Palestinian Authority government to take over in its place and hold general elections.For the past several months, Fatah and its chairman Mahmoud Abbas have called on Hamas to announce and implement such a plan.Since Hamas ousted the Fatah-dominated Palestinian Authority from Gaza in 2007, Hamas and Fatah have essentially established two separate governments – one Hamasrun government in Gaza and another led by the PA in the West Bank. While the two parties have signed a number of reconciliation agreements aimed at creating one shared government, they have failed to implement any of them.Hamas’s announcement on Sunday followed separate talks in Cairo last week between Egyptian and Fatah officials and between Egyptian and Hamas officials. The groups of Fatah and Hamas officials were still in the Egyptian capital, Cairo, on Sunday evening.Fatah Vice Chairman Mahmoud al-Aloul welcomed Hamas’s announcement, but said his party would like to confirm its veracity.“If the news is correct, that is good and positive,” Aloul was quoted as saying on Fatah’s official Facebook page. “But we do not want to act with haste regarding what is being said in the news.” The last time Hamas and Fatah tried to reconcile, in May 2014, the two parties agreed to permit the PA government to take responsibility for Gaza and hold elections.However, the PA was ultimately given a limited mandate as a Hamas shadow government continued to control most of Gaza’s government institutions.Elections also never took place.Fatah Central Committee member Azzam al-Ahmad, who is currently leading the delegation of Fatah officials in Cairo, said on Sunday that Hamas and Fatah will hold a bilateral meeting to discuss reconciliation, but did not specify a time. Ahmad added that the Fatah-Hamas meeting would be followed by a meeting of most of the Palestinian factions.Hamas spokesman Fawzi Barhoum said that Hamas now expects Abbas to reciprocate to advance reconciliation.“This puts Abu Mazen [Abbas] and Fatah to the real test,” Barhoum said in a statement on Hamas’s official website. “Our people are looking for a practical and actual response to achieve its ambitions of national unity and real partnership.”Hamas would like Abbas to lift the various punitive measures he has taken against Hamas in Gaza over the past four to five months, including cuts to budgets allocated to Gaza for electricity, medical services, salaries and other purposes.Last Tuesday, Ahmad said that if Hamas disbanded its administrative committee, Abbas would lift its punitive measures against it.Abbas, currently in New York for the annual meeting of the UN General Assembly, told official PA media he is satisfied with Hamas’s announcement, but made no comments about the future of his punitive measures against it. He also said he will hold a meeting of the Palestinian leadership when he returns to Ramallah.The PA president is scheduled to meet Wednesday with US President Donald Trump, whose government considers Hamas a terrorist organization.Muhammad Dahlan, a rival of Abbas in Fatah, praised Hamas for its announcement and said he supports reconciliation.“Our position is fixed and has and will not change regarding supporting efforts for national reconciliation,” Dahlan, who resides in the United Arab Emirates, said in a Facebook post. “We have called on all parties... to achieve the unity of our people, factions and forces.”Over the past several months, Dahlan and Hamas, who were once foes, have formed an alliance, agreeing to carry out a number of social and economic projects in Gaza.Abbas, who has made substantial efforts over the past year to purge Dahlan from Palestinian politics, would be unlikely to consent to his adversary playing a role in a possible, future arrangement between Fatah and Hamas.Bjorn Brenner, the author of Gaza Under Hamas, said Hamas agreed to disband its administrative committee because it has come under pressure to deliver to the people of Gaza.The unemployment rate in Gaza currently stands at 42%; infrastructure for water and electricity do not meet its residents’ basic needs; and half the population relies on humanitarian aid.However, Brenner was skeptical that Hamas’s announcement on Sunday would lead to a full-fledged reconciliation between Hamas and Fatah.“Hamas wants to improve the situation in Gaza, but it doesn’t want to give up control of it,” he said. “Despite its announcement, I think it will remain the de facto ruler of Gaza.”