Masses joined the prayers to express their dismay with Israel's decision to install metal detectors at the entrance to the holy site. 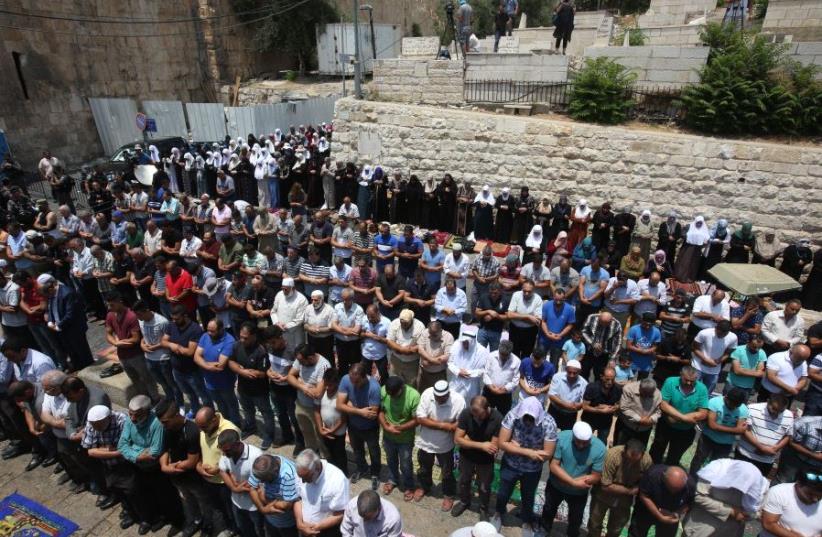 An organized mass prayer session outside Jerusalem's Lions' Gate, July 2017
(photo credit: MARC ISRAEL SELLEM/THE JERUSALEM POST)
Advertisement
Hundreds of Muslim worshipers congregated outside Jerusalem's Lions' Gate to hold a mass prayer Thursday afternoon in protest over the Israeli government's decision to install metal detectors at the entrance to the Temple Mount following last week's terror attack, which claimed the lives of two border policemen. Border police and military personnel stood guard in the area to ensure that the prayer didn't evolve into a violent demonstration. Israeli soldier looks on over mass prayer session (credit: Marc Sellem)Security forces are expecting an even bigger turnout at the mass, public prayers in Jerusalem and its surroundings on Friday, when the traditional prayers are slated to be held. Worshippers at the Lions' Gate, Jerusalem (credit: Marc Sellem)Immediately following last Friday's attack, the Temple Mount was closed off for visitors of all faiths. Even though it has since reopened, Muslim leaders in Israel and neighboring countries have called on Palestinians to 'rage' against the Israeli government's decision and to relocate their prayers from the mosques to the streets in order to demonstrate their discontent with the situation. Muslim women at the mass prayer session (credit: Marc Sellem)The Wakf Islamic trust (that administers the Temple Mount and other Islamic sites in Jerusalem on behalf of the Jordanian government) went so far as to tell preachers and imams in Jerusalem not to deliver sermons in the city's mosques on Friday, redirecting them to hold the prayers adjacent to the Mount. Muslim women praying outside the Lions' Gate in Jerusalem (credit: Marc Sellem)While Israel is saying that the installation of metal detectors is meant to prevent potential attackers from entering the holy site with weapons and perpetuating acts of terror, Muslim leaders are blaming Israel of discrimination.