East Jerusalem motorist ran roadblock near the capital before police found his abandoned vehicle in Herzliya. 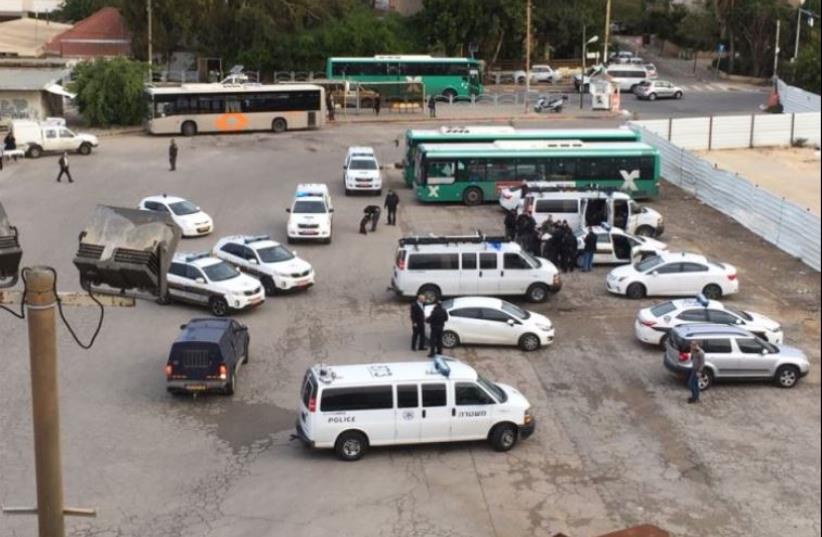 Manhunt underway in central Herzliya for feared terrorist on the loose.
(photo credit: TZEVET DROR)
Advertisement
Security forces on Tuesday located and arrested an Arab Israeli motorist in Herzliya after he ran through a checkpoint in Jerusalem and drove to the city north of Tel Aviv.Before police apprehended the suspect, authorities had located the motorist's vehicle in the center of the city.Meanwhile, the Herzliya Municipality bolstered security amid fears that the 20-year-old driver from east Jerusalem intended to carry out a terrorist attack. Police named the suspect as 20-year-old east Jerusalem resident Ahmed Hatib, who was known to authorities for a previous incident involving a knife.Members of the driver's family had expresses worry that the suspect was planning to carry out a terrorist attack. In light of the reports of a feared attack, Herzliya Mayor Moshe Padlon ordered a massive security reinforcement at the city's educational institutions and population centers. The suspect's motives for running the blockade remained unclear. During the event, Herzliya Municipality urged residents to remain vigilant and inform police at the 100 hotline of any unusual activity or suspicion figures. Channel 10 reported  that there was likely no connection between this incident and the gunman still at large following Friday's deadly shooting at a bar in central Tel Aviv. In and around Tel Aviv meanwhile, security remained high as well as the search for the fugitive suspect from the Dizengoff Street attack stretched into a fourth day, with police seeming no closer to finding the suspect.Tel Aviv City Hall said municipal security services had stepped up patrols, with an emphasis on schools and daycare centers.Security was enhanced at creches, nursery schools and educational institutions across the city, including police and private security officers posted outside these buildings throughout the day.The heightened alert was most pronounced in north Tel Aviv, especially in Ramat Aviv, where a cellphone belonging to the shooter  was found on Friday not long after the attack.