By DANIEL K. EISENBUD
OCTOBER 9, 2016 10:20
Scene of shooting attack in Jerusalem's Ammunition Hill, 9.10.16
Advertisement
Adv.-Staff-Sgt.-Maj. Yosef Kirma, 29, a Special Patrol officer, and Levana Malichi, 60, a former Knesset employee, were shot and killed, and six others were wounded during a drive-by attack in the capital on Sunday.The terrorist attack began near Israel Police headquarters across the street from the Ammunition Hill light rail stop in northeastern Jerusalem and ended in nearby Sheikh Jarrah neighborhood.The terrorist, a 39-yearold resident of the Silwan neighborhood, just south of the Old City, was shot dead during an exchange of gunfire with police. The attacker’s identity is under a gag order despite being widely reported in Palestinian media. 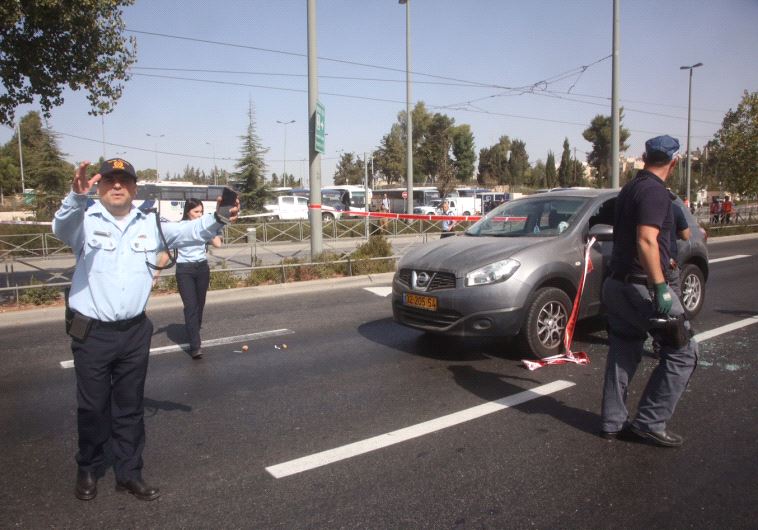 Photo Credit: Marc Israel Sellem / The Jerusalem PostPrime Minister Benjamin Netanyahu, during comments before the cameras at the opening of Sunday morning’s weekly cabinet meeting, briefly referenced the attack, saying the details of what happened were still being clarified.After sending wishes for a speedy recovery to the wounded, he praised the police for quick and determined action in killing the terrorist.The shooting began at approximately 10:30 a.m., when the terrorist, who was driving a white car, opened fire on a male and female civilian near the Ammunition Hill light rail stop, across the street from police headquarters.“The terrorist opened fire on two people, and one woman in her 60s was critically wounded, and a man was moderately-to-seriously wounded,” police spokesman Micky Rosenfeld said.The woman, later identified as Malichi, died of her wounds a short time later at Hadassah-University Medical Center in Mount Scopus, Rosenfeld said. 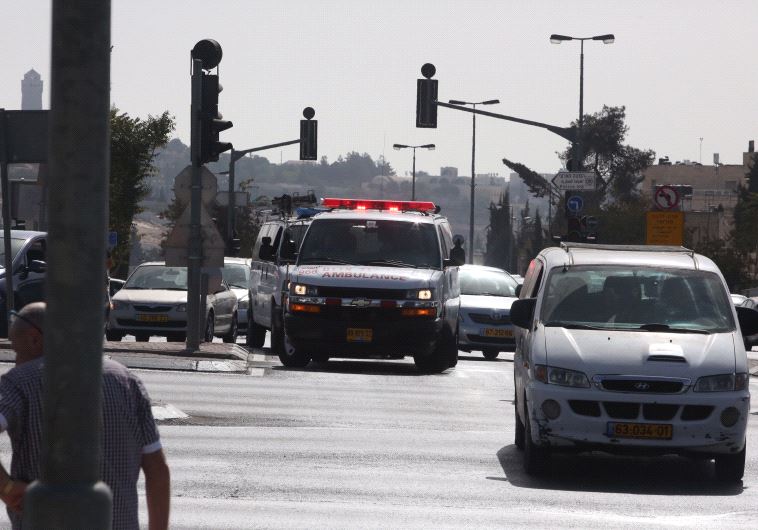 Photo Credit: Marc Israel Sellem / The Jerusalem Post“After shooting the two civilians, the suspect continued driving his vehicle into the Sheikh Jarrah neighborhood, where two officers on motorcycles from the Special Patrol Unit chased him. Shots were fired at our officers, who returned fire, and the terrorist was shot and killed at the scene.”Rosenfeld said Kirma, who was shot in the head at close range, died at the same hospital, while the second officer was treated for a light gun wound to his leg.Kirma was buried a few hours later at the National Military and Police Cemetery, in a funeral attended by his wife, parents, two brothers, extended family, and hundreds of fellow officers and friends.During the gun battle in Sheikh Jarrah, the terrorist also shot a woman whose identity has not been released, Rosenfeld said. She is in moderate- to-serious condition.“Police immediately closed off the area and bomb disposal experts arrived at the scene within minutes and examined the vehicle to ensure there were no explosives,” he said. “A forensics team then collected evidence.”Police Commissioner Insp.- Gen. Roni Alsheich, who also rushed to the scene, called on the members of the public to remain alert, but not to change their daily routines as the High Holy Days continue.“It is not surprising that there are people who are attempting to shatter the tranquility of the holidays and hurt Israeli morale,” he said.“However, the people of Jerusalem are strong and will not be deterred by such attacks.”Alsheich added that despite the violence, there is “no change in the security assessment, and no need to change behavior,” and that those planning to visit Jerusalem for the holidays should not alter their plans.While Alsheich said nearly 4,000 police officers remain on watch in the capital, he conceded that Sunday’s attack may embolden other would-be attackers.ZAKA rescue and recovery organization chairman Yehuda Meshi-Zahav said the organization will remain “on high alert at this time, not only in Jerusalem but also throughout the country.”“They were able to give an immediate response to the injured at the scene,” said Meshi-Zahav.During a brief press conference at the scene of the attack, Public Security Minister Gilad Erdan said no intelligence was received beforehand, noting that the terrorist had an Israeli identification card.While Erdan said he could not divulge details about the investigation, he emphasized that because thousands of police reinforcements have been deployed in Jerusalem for the holidays, further bloodshed was prevented.The minister added that incitement on social media continues to contribute to the ongoing rash of “lone-wolf” terrorist attacks that have taken place throughout the country over the past year. He cited Facebook specifically, saying that the social network has a responsibility to end all forms of incitement to murder. The security cabinet convened on Sunday evening for a regularly scheduled meeting, during which security officials briefed the ministers about the attack.The US State Department said it condemned “in the strongest possible terms the terrorist attack that took place today in Jerusalem, which resulted in the death of two Israelis and injured several others.”The statement added that “there is absolutely no justification for the taking of innocent lives. We also condemn the statements glorifying this reprehensible and cowardly attack.”Hamas praised the “heroic Jerusalem operation,” and said it considers the attack a “natural response to the occupation’s crimes and violations at the expense of our people and holy sites.”The terrorist organization’s spokesman Fawzi Barhoum said the murders are “confirmation of the continuation of the intifada,” adding that “all of the occupation’s attempts to break and liquidate it will fail.”Herb Keinon, Adam Rasgon and Jerusalem Post staff contributed to this report.
Advertisement
Subscribe for our daily newsletter