According to initial reports, the female assailant was shot and wounded by security forces at the scene. 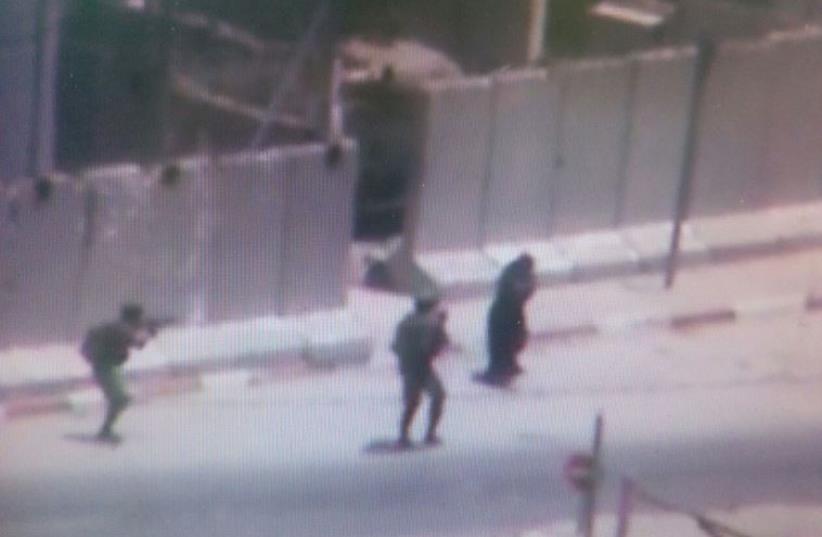 Still from scene of attempted stabbing attack on IDF soldiers in the West Bank, June 2, 2016
(photo credit: Courtesy)
Advertisement
A Palestinian woman was shot and killed on Thursday after she tried stabbing IDF soldiers in the northern West Bank. The IDF said that the knife-wielding Palestinian woman arrived at a military post near the Palestinian town of Anabta, where she tried attacking nearby troops. The soldiers reportedly left their guard post and initially tried apprehending the woman before firing shots at her. There were no injuries among the Israelis. While the frequency of lone-wolf violence that plagued Israel in recent months has simmered down, sporadic attacks continue to occur. Earlier in the week, a Palestinian teenager stabbed and lightly wounded a soldier in Tel Aviv in what police and the Shin Bet (Israel Security Agency) were investigating as a likely terrorist attack.Police said Monday that a Palestinian teen with a screwdriver stabbed and lightly wounded a 19-year-old soldier at the scene, before he was cornered by bystanders in an apartment building nearby.Prior to that, on May 23, a Palestinian woman was shot dead after she attempted to stab security forces at a checkpoint north of Jerusalem.According to a Border Police statement, the Palestinian woman arrived at the Ras Bidu checkpoint near Givat Ze’ev and was approached by officers “who thought she appeared suspicious.”The officers then asked her to stop and fired warning shots in the air, but she then ran toward them brandishing a knife and was shot by the officers, the statement read.Ben Hartman contributed to this report.