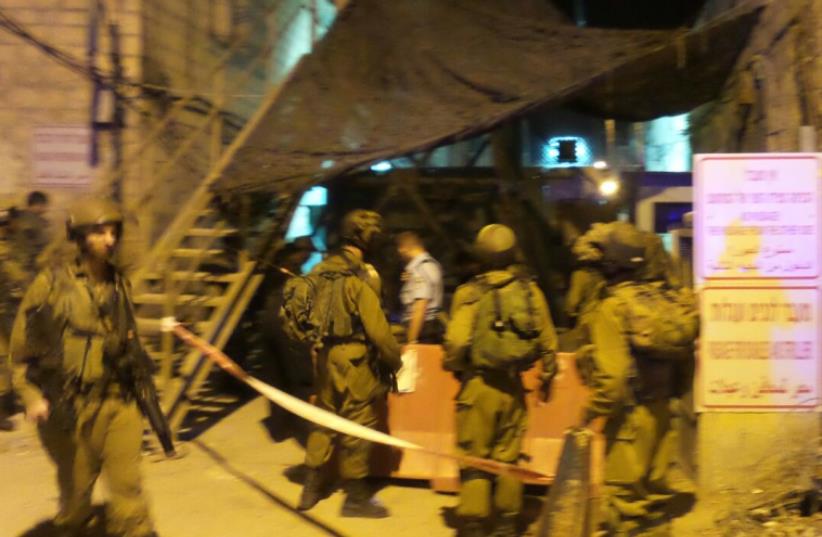 Terrorst stabbing in Hebron
(photo credit: TZIPI SHLISSLE/TPS)
Advertisement
Shortly after Hebron saw its third stabbing attack, Jerusalem Police said Saturday night that a terrorist at the Kalandiya checkpoint pulled a knife and tried to stab a police officer at the crossing, but was unable to penetrate the officer’s bulletproof vest.Officers at the scene then opened fire on the attacker, hitting him in the lower body. A bomb squad officer then approached the wounded attacker, who pulled out another knife and tried to stab the officer. A Border Police officer then opened fire, hitting the attacker, who was subdued. Police said the Palestinian assailant was identified as a 24-year-old resident of Kalandiya. Palestinian assailants have carried out five attempted stabbings against Israelis on Saturday. In addition to the latest attack at Kalandia, three stabbings occurred in the West Bank city of Hebron and one attack was carried out in Jerusalem. Shortly before the attack at the Kalandia crossing, a suspected terrorist stabbed and moderately injured an IDF soldier at the Hasam Shoter checkpoint in Hebron.
Scene of 3rd Hebron stabbing Saturday
A second soldier shot and critically wounded the Palestinian attacker. The assailant received initial medical treatment at the scene.Magen David Adom paramedics evacuated the wounded soldier to the Hadassah Ein Kerem Medical Center in Jerusalem with knife wounds to his upper body.Shortly afterward, dozens of Jewish youth attempted to obstruct the pathway and punctured a tire of the ambulance carrying the terrorist from the scene of the stabbing attack.IDF forces eventually dispersed the crowd and the ambulance manage to drive away from the scene.The attack was the third in Hebron and fourth of the day, along with one in Jerusalem.