One attacker shot and killed at scene, security forces apprehend another suspect. 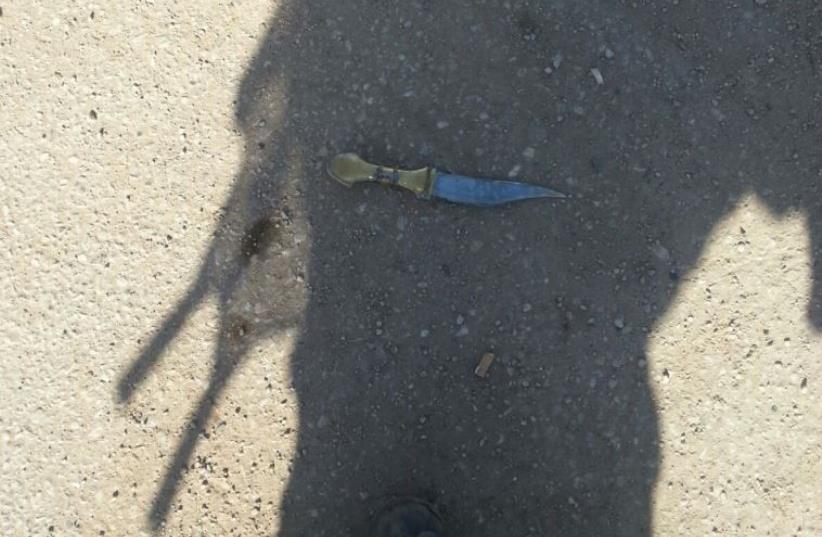 Knife at the scene of a stabbing attack in Kikar Adam, October 21, 2015
(photo credit: BITACHON SADEH GROUP)
Advertisement
A terrorist stabbed and seriously wounded a female IDF soldier on Wednesday in an attack in Kikar Adam, north of Jerusalem in the Binyamin region. The wounded soldier was from the Home Front Command's Kedem battalion.A second female soldier shot and killed the knife attacker, the IDF said. Another suspect was apprehended near the scene of the attack.
Stabbing attack in Binyamin region, Israeli woman seriously wounded
According to Magen David Adom paramedics, the hurt 19-year-old victim suffered wounds to her upper body.MDA Paramedic Assaf Ben Artzi, who was first paramedic on the scene, described finding the woman lying on a dirt path near a road, seriously wounded with a stab wound, and civilians attempting to help her. He began giving her life-saving initial treatment, before she was evacuated in an intensive care ambulance, and retained full consciousness during the evacuation, he said. She was transported to Hadassah University Medical Center, on Jerusalem's Mount Scopus. The attack came after the IDF carried out a large-scale sweep of security suspects in overnight raids in the West Bank between Tuesday and Wednesday, arresting 47 Palestinians, including 16 Hamas members.More than 20 of the 47 suspects  allegedly took part in unorganized terror attacks and violent disturbances.Security forces arrested Hamas members in the Balata refugee camp south of Nablus, Inbus, which is also south of Nablus, in Arura, north of Ramallah, and  in Sinjil, northeast of Ramallah.Hamas members were also nabbed in Beit Kahil, northwest of Hebron, and in Hebron. Additional Hamas member were arrested in Dura and Beit Awa, southwest of Hebron, and in Samoa, south of Hebron.