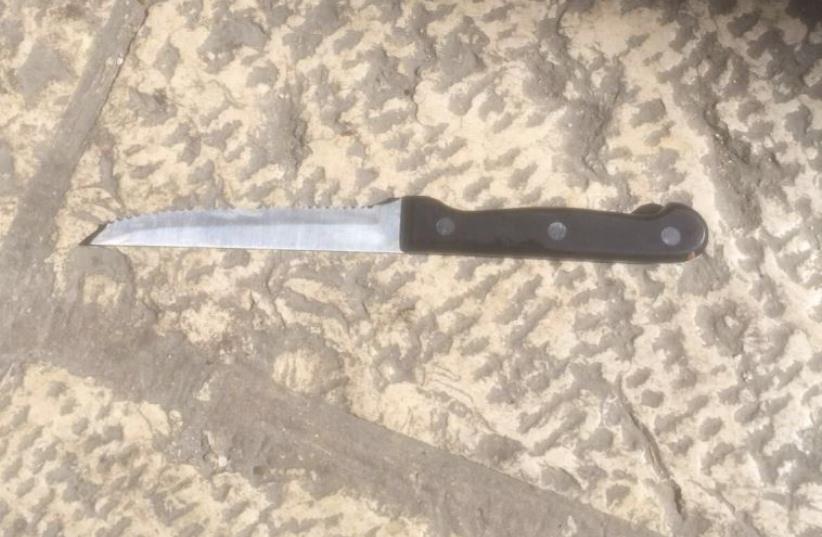 Knife used in attempted stabbing in Jerusalem, March 8, 2016
(photo credit: ISRAEL POLICE)
Advertisement
A knife-wielding Arab woman in her 50s was shot dead in Jerusalem Tuesday morning after attempting to stab a Border Police officer in the Old City’s well-travelled Haguy Street.At approximately 10 a.m., police said the unidentified woman from east Jerusalem approached a group of officers carrying out security measures in the area, which have been considerably heightened for US Vice President Joe Biden’s visit.“She pulled a knife from her bag and tried to stab one of the officers, who acted immediately and responsibly upon realizing he was in immediate danger and shot and killed the woman,” said Police spokesman Micky Rosenfeld.“She was pronounced dead at the scene, the knife was seized as evidence, and the area was immediately cordoned-off.”None of the officers were wounded, he said, and a coroner arrived minutes later to collect the corpse.Rosenfeld said an investigation has been launched to determine who the woman is, and if she acted alone or is part of a terror cell.In the meantime, he said security measures have been implemented throughout the capital for Biden’s visit, with an emphasis on the downtown area and Old City.“Several hundred officers are involved in security operations to ensure safety over the next two days during his visit,” Rosenfeld said.“Police are continuing security patrols to provide an immediate response to terrorist attacks,” he added.    Most terrorist activity in the Old City and capital has been concentrated outside east Jerusalem’s Damascus Gate, where several deadly attacks have been carried out and thwarted since the terror wave engulfed Jerusalem last October.The flashpoint area outside Damascus Gate continues to be densely patrolled around the clock by security personnel.