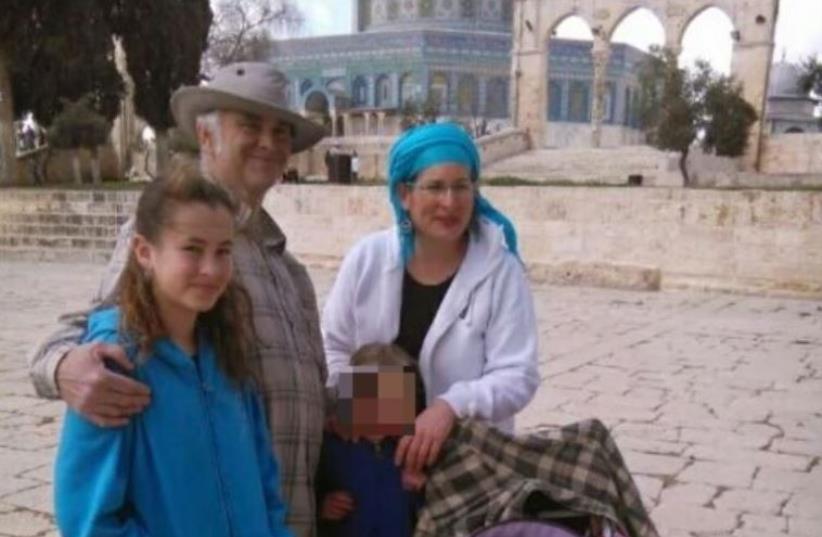 Hallel Yaffa Ariel (L) was killed in a terrorist stabbing in Kiryat Arba, June 30, 2016
(photo credit: Courtesy)
Advertisement
A Palestinian terrorist stabbed a 13-year old girl to death in her bedroom on Thursday morning after he infiltrated the West Bank settlement of Kiryat Arba, which is located next to Hebron.“My daughter was sleeping calmly when he [the terrorist] came into her bedroom,” the girl’s mother Rena Ariel told reporters outside the hospital. “She was happy,’ she added.A Magen David Adom paramedic said that when he arrived at the scene the teenage girl, Hallel Yaffa, was unconscious and not breathing. They were able to resuscitate her at the scene, but it was touch-and-go during the ride to Shaare Zedek Medical Center in Jerusalem, as they fought to keep her alive.She was pronounced dead shortly after her arrival, without ever regaining consciousness.After the attack, the IDF and one of the Prime Minister Office’s spokesman tweeted a photograph of her blood-stained bedroom.
Hallel had been a member of the dance troop Harikod and had performed in Jerusalem the night before. In the morning she was allowed to sleep in. The rest of her family, including her younger sisters, Shira Ruth, eight, and Kana, four, left for the day. Hallel, however, was fast asleep when Muhammad Tarayrah, 17, breached the settlement’s fence, setting off an alarm that alerted residents to stay indoors.He still had time to walk to the Ariel home, which was located in an isolated area of Kiryat Arba near its security road.Tarayrah slipped into Hallel’s bedroom through an open window and stabbed her multiple times. He was still in the house when the settlement’s security team arrived, including Hallel’s stepfather, Amichai, who was part of the team. They had not known that Tarayrah as in the home, they simply entered it as part of a sweep of the area. According to Amichai’s sister, they noted that something was wrong the moment they walked in. The security team quickly found, shot and killed Tarayrah. One of its members, Shuki Gilboa, age 31, was wounded during the shooting. His wife, a volunteer for Magen David Adom, had a feeling that something was wrong with her husband and rushed to the scene.
IDF sweeps Kiryat Arba after attack
She traveled with him to the Hadassah Medical Center at Ein Karem. He was hospitalized and is expected to recover from his injuries.Since the wave of Palestinian violence against Israelis began in September 2015, there have been many attacks in and around Hebron, as well as on the outskirts of Kiryat Arba. But an infiltration into the settlement itself is rare.Netanyahu and Defense Minister Avigdor Liberman met and ordered the IDF to close off the Palestinian village of Bani Naim, located near Kiryat Arba, where Tarayrah lived. They also ordered the IDF to rescind work permits belonging to Tarayrah’s immediate and extended family.According to his Facebook posts Tarayrah was partially inspired by a vehicular terror attack just outside of Kiryat Arba in which an Israeli couple was lightly insured. The IDF unit which responded to the attack shot and killed the Palestinian driver.Tarayrah mentioned her in his posts, under the hashtag "a sister to bravery”.At the beginning of the week he wrote a post saying that "the death is a right and i am asking for my right." His uncle, Yousuf Tarayrah, carried out a car-ramming attack in Hebron in March.Mayan Groisman contributed to this report.