A 20-year-old man was moderately wounded from stab wounds to his upper body. 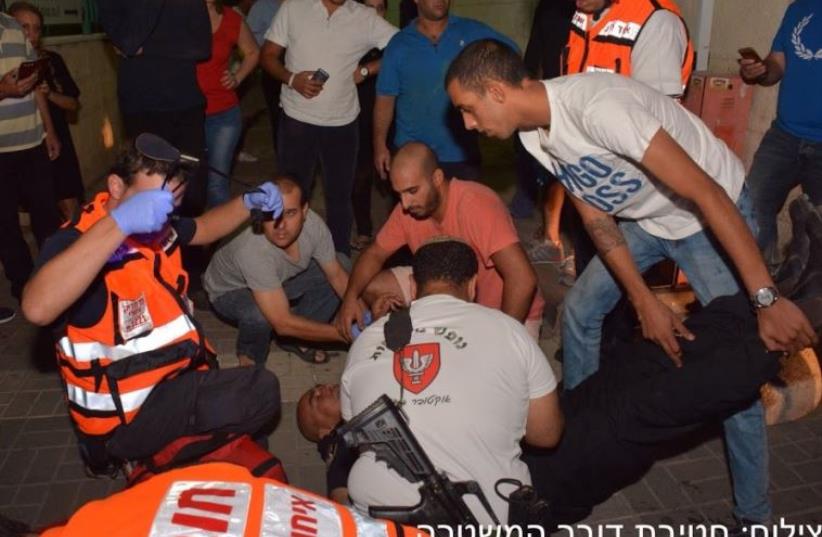 Scene of Afula stabbing attack
(photo credit: COURTESY ISRAEL POLICE)
Advertisement
Two people were stabbed in Afula in a terror attack on Thursday.The attack was the fourth such stabbing attack perpetrated in Israel on Thursday, with previous attacks in Jerusalem, Tel Aviv and Kiryat Arba.The attack occurred on Arlozorov Street in Afula and a 21-year-old IDF soldier was wounded, Magen David Adom stated.Paramedics provided medical treatment at the scene before taking the two people to Emek Medical Center in Afula.Following the attack, civilians pinned the terrorist, who spoke Arabic, to the ground until police could arrive. A group of bystanders in the area tried to attack the suspect, as well as officers. More police were called to the scene to disperse them with tear gas.
Military perspective - Not an intifada yet
The Shin Bet (Israel Security Agency) named the attacker as Jenin resident Tarak Yahya, 20.Yahya, who is single, has no history of previous security offenses or arrests.Miki Fischler, a volunteer United Hatzalah paramedic who arrived on the scene, described finding "a youth who was stabbed by a terrorist in his upper body. Together with other volunteers we gave him medical treatment. He was fully conscious and suffering from stab wounds."He added that "security forces acted to neutralize the terrorist and to prevent him from stabbing additional civilians. A number of people were treated on the scene for shock and inhalation of tear gas."