The terrorist was shot and subdued. No Israelis were reported injured in the attack. 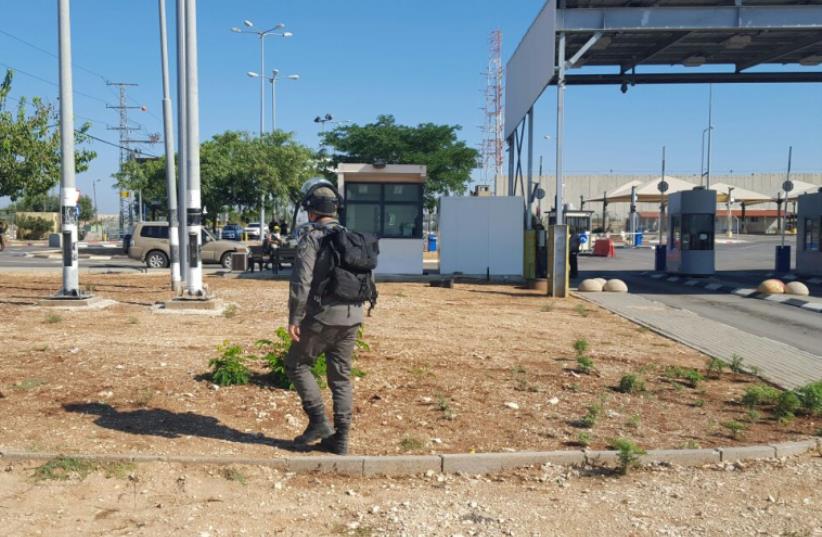 Attempted terror attack at Gilboa crossing, near Afula - Oct. 31, 2015
(photo credit: DEFENSE MINISTRY)
Advertisement
A Palestinian terrorist who attempted to stab security personnel with a knife at the Gilboa Crossing north of Jenin was shot and killed on Saturday morning.The attacker, 18, from the nearby village of Kabatiya, tried to stab Defense Ministry Crossings Authority guards at the Jalame checkpoint. There were no injuries among Israelis in the incident.According to a Defense Ministry spokesperson, the incident occurred when a Palestinian terrorist ambushed a security guard at the Gilboa Crossing after hiding behind a taxi.The security guard was combing through the area when the terrorist began running towards the officer holding a weapon in his hand. After ordering the assailant to stop several times, the officer readied his weapon and killed the suspect.Following the incident, Brig.-Gen. (res.) Kamil Abu Rokon, head of the Crossings Authority, said, "The guard followed procedure exactly the way he was trained," adding the officer "identified the terrorist within seconds, attempted to halt his progress and subdued the suspect before he could harm" anyone in the area.The attack came one week after a Palestinian youth posing as a candy vendor tried to stab a security guard at the Gilboa in the same location, before being shot dead.The terrorist, Muhammad Zakarna, 16, also from Kabatiya, had approached the checkpoint with a carton of Krembo candies, the Defense Ministry said last week."He suddenly threw down the carton, pulled out a knife, and started running at the security personnel staffing the checking zone of the crossing," the ministry said. A guard spotted the terrorist running between cars waiting to cross the checkpoint and shot him from short range