No initial reports of injury to Israeli forces. 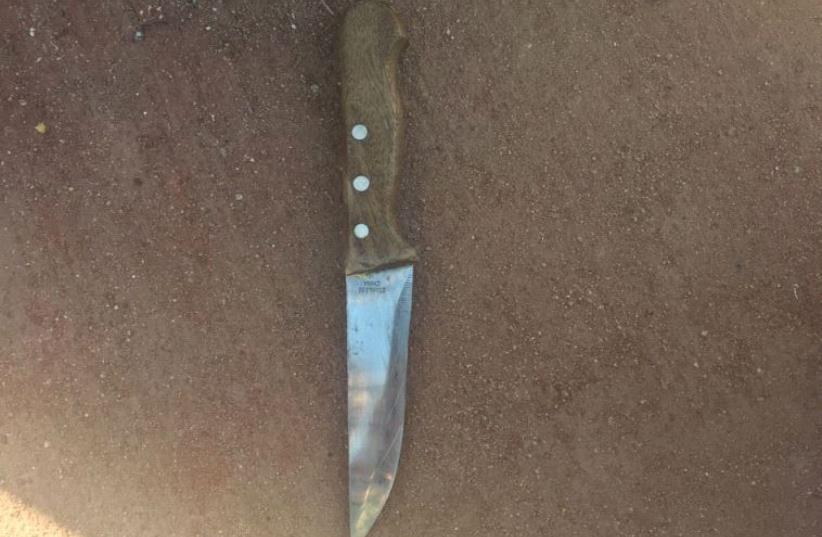 Knife from attempted stabbing attack at the Ofra Junction in the West Bank, November 3, 2016
(photo credit: IDF SPOKESMAN’S UNIT)
Advertisement
A soldier was lightly inured from shrapnel after being shot at a military checkpoint near Tulkarm, the IDF spokesperson stated Thursday night.The soldier was being treated on the scene.Security forces were searching for the assailant. Earlier Thursday, A Palestinian assailant who attempted to stab soldiers guarding at a bus stop near the Ofra settlement, in the West Bank, was shot and killed by Israeli security forces.No Israelis were injured in the attack. Security forces were further investigating the incident.Thursday's incident came after a Palestinian policeman shot and wounded three soldiers at the Focus Checkpoint that leads to Ramallah on Monday.Security forces at the scene shot and killed Muhammed Turkman, a 25-year-old Palestinian police officer from the village of Kabatiya.Both attacks occurred in the Binyamin region of the West Bank, near and on Route 60.In Washington on Wednesday, US State Department spokesman John Kirby spoke out against Palestinian violence and incitement.“I would just tell you we were deeply concerned by reports yesterday about a Fatah Facebook page praising the Palestinian who shot three Israeli soldiers day before yesterday. And we’ve raised this issue directly to the Palestinians as well,” Kirby said.Jpost.com staff contributed to this article.