Shaul Nir and his wife Rachel came under a hail of bullets while driving near Tulkaram; settlers call for closure of Ha'orot Junction. 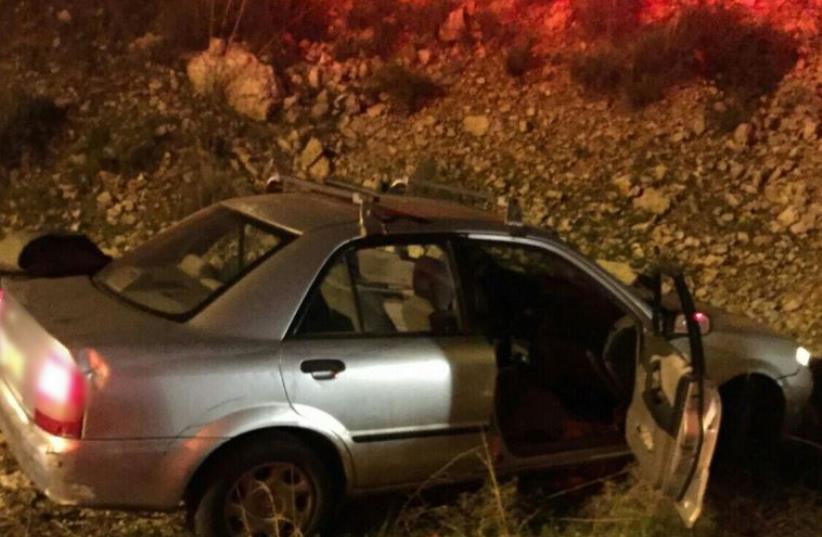 Scene of shooting attack in West Bank, December 9, 2015
(photo credit: MDA)
Advertisement
A drive-by shooting wounded an Israeli couple near Tulkarm on Wednesday night, hours after a soldier and a civilian were injured in a stabbing attack in Hebron.The wounded man, Shaul Nir, had been a convicted member of a Jewish terrorist group that perpetrated lethal attacks against Palestinians in the 1980s. He and his wife, Rachel, sustained gunshot wounds when a Palestinian showered their vehicle with bullets as they drove near Tulkarm in the northern West Bank.Magen David Adom paramedics and soldiers evacuated the couple to Beilinson Medical Center in Petah Tikva.
Scene of shooting attack in West Bank, December 9, 2015
Doctors listed Shaul Nir as being in serious condition with a head injury, possibly from the car crash that followed the shooting, in addition to gunshot wounds to his limbs. He was expected to undergo surgery. His wife sustained gunshot injuries in her limbs, and was listed in satisfactory condition with light injuries, MDA said.Soldiers were searching for the terrorists, and roads in the area were shut to traffic.Nir was a convicted leading member of the so-called Jewish Underground that carried out a series of attacks including a deadly grenade assault and attempted assassinations of West Bank mayors that maimed several people. He served part of a life sentence that was later commuted.The Nirs live in the Jewish Quarter of Jerusalem’s Old City. A statement released by the Avnei Hefetz settlement, near the site of Wednesday’s shooting, said a terrorist had ambushed the Nirs near Tulkarm.Yossi Dagan, head of the Samaria Regional Council, demanded the IDF shut the road where the shooting occurred to Palestinian traffic “for the sake of the residents’ security.”Earlier on Wednesday, a Palestinian stabbed a soldier and a civilian near Beit Hadassah, in Hebron’s Jewish Quarter. A civilian security coordinator at the scene fatally shot the terrorist.The soldier was wounded lightly, as was a youth identified as the son of former Bayit Yehudi MK Orit Struck, who was injured while trying to tackle the assailant.The attack occurred during a security check at the entrance to Beit Hadassah.MDA paramedic Zaki Yahav said that “when we arrived on the scene, we saw near Beit Hadassah two approximately 20-year-old youths laying down, fully conscious and suffering from stab wounds.“One of the youths sustained a number of stab wounds to his upper body and the second was stabbed in the leg.”Paramedics took the victims to Shaare Zedek Medical Center in Jerusalem.On Monday, a Palestinian terrorist stabbed and critically wounded an Israeli civilian near Hebron’s Cave of the Patriarchs, before being shot dead in the act by Border Police officers.Tovah Lazaroff contributed to this report