Assailant shot and killed at the scene; wounded soldiers in moderate condition; attacker said to be brother of other terrorist, according to Palestinian media. 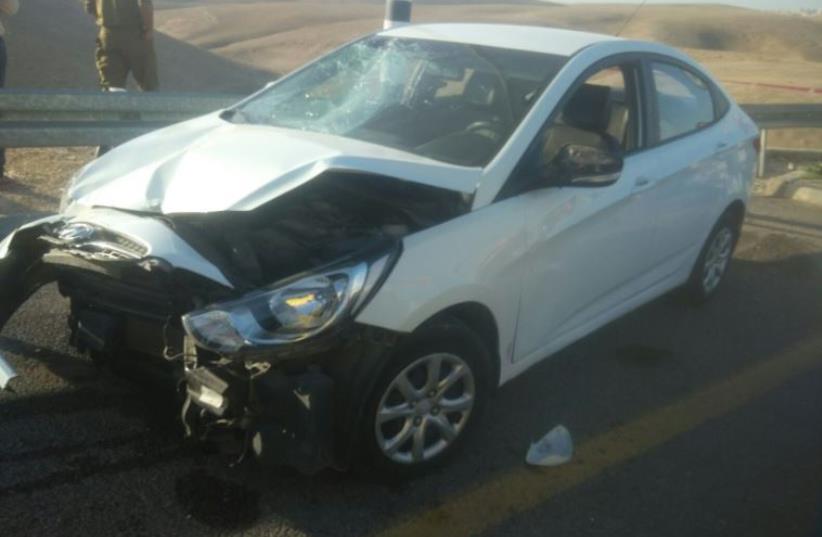 Palestinian vehicle rammed into and wounded two Israelis in the West Bank near Kfar Adumim, November 27, 2015
(photo credit: POLICE SPOKESPERSON'S UNIT)
Advertisement
Two IDF soldiers were wounded in a suspected vehicular-ramming terror attack near the West Bank settlement of Kfar Adumim on Friday morning. According to the IDF, the soldiers were in moderate condition.
Scene of car ramming near Kfar Adumim
The suspected assailant was shot and killed at the scene.According to police, a Palestinian vehicle rammed into the two Israelis, who were standing at a bus station near the Kfar Adumim junction. Magen David Adom paramedics provided initial treatment to the two wounded soldiers in their 20s before evacuating one of them to Shaare Zedek Medical Center in Jerusalem. Emergency response workers transported the other soldier to Hadassah University Medical Center in the capital's Ein Kerem. Later Friday, Palestinian media reported that the attacked who carried out the morning's car-ramming was identified as Ramallah resident Fadi Hasib, the brother of the perpetrator of another such attack in the same area last week.The Palestinian reports named Shadi Hasib as the terrorist in the prior attack. Noam Amir/Maariv Hashavua contributed to this report.