No update on whether any suspects have been identified or captured. 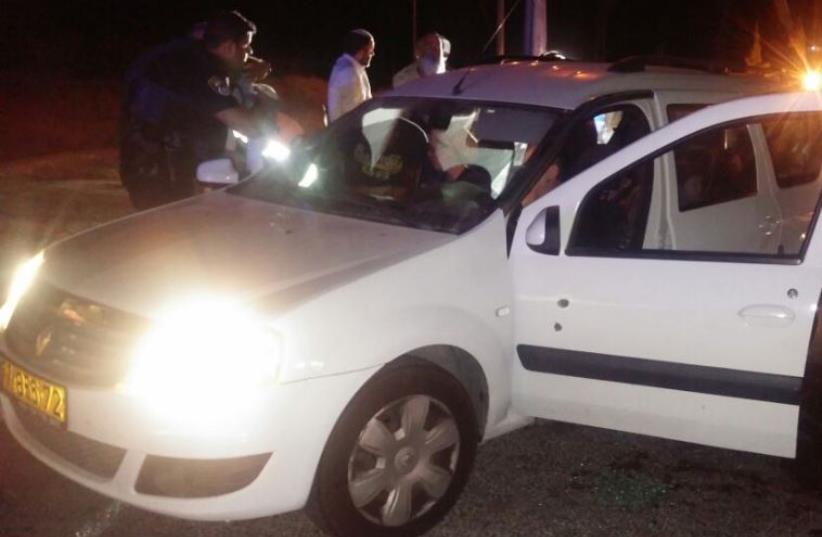 Man injured after Palestinian gunman shoots at his car near Tekoa
(photo credit: GUSH ETZION REGIONAL COUNCIL)
Advertisement
A Palestinian gunman shot and wounded an Israeli man in the lower leg as he drove in the Gush Etzion region of the West Bank on Saturday at around 11 p.m. The gunman is thought to have executed the attack while driving in a passing car, before escaping south.It’s the second shooting attack in the West Bank this month.  On Friday, July 1, Palestinian gunmen shot and killed Rabbi Michael “Miki” Mark as he drove on Route 60 in the South Hebron Hills.
Scene of shooting attack near Tekoa, July 6. (Photo credit: Gush Etzion Regional Council)
“The roads have become red with blood. We cannot let this continue. The prime minister and the defense minster have to understand that the reality has changed. We have gone from knife attacks to shooting on the roads,” said Gush Etzion Regional Council head Davidi Perl.“We have to stop this immediately,” he said.The victim, a man aged at around 30-years old, was treated at the scene by Magen David Adom paramedics. The injury was not thought to be life threatening and he has been evacuated to Shaare Tzedek Medical Center in Jerusalem.The victim was reportedly not a resident of the area, but a guest who was visiting one of the nearby settlements for Shabbat and returning home when the attack occurred in the area of the Efrat and Tekoa settlements as well as the Palestinian village of Sair.The IDF is searching the area for the suspect and has closed off Sair.At the same time as the shooting, it was feared that a terrorist had infiltrated the Karni Shomron settlement, which is located a short distance outside of Kfar Saba. But it proved to be a false alarm.Since the start of the wave of violence in mid-September 40 people have been killed by Palestinians and 511 people were injured in attacks that occurred on both sides of the Green Line. There have been 79 stabbings, 76 attempted stabbings, 96 shootings, 45 vehicular attacks and one bus bomb.On Sunday settlers have planned to hold a march along Route 60 from the spot where Rabbi Mark was killed to his home settlement of Otniel in the South Hebron Hills. A rally will be held there at 7 p.m.