Concern among officials about Iran’s influence – and what is believed to be its goal of forming a land corridor from Tehran to Beirut – has grown. 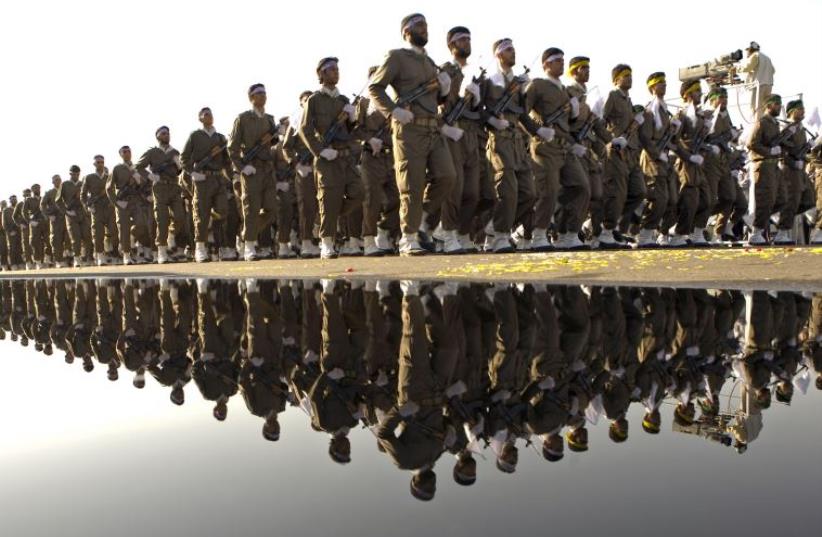 Members of Iran's Revolutionary Guards take part in a military parade to commemorate the 1980-88 Iran-Iraq war in Tehran
(photo credit: REUTERS)
Advertisement
The threat from Tehran’s growing strength in Syria should be the number one focus of concern for Israel and the West, a top Israeli intelligence official said on Tuesday.“The Iranian nuclear issue will of course always be a very high priority,” Intelligence Ministry director-general Chagai Tzuriel told The Jerusalem Post on the sidelines of the 8th annual Israel Defense Exhibition in Tel Aviv. “But the negative potential built-in in the nuclear agreement will become more threatening as time goes by, while the threat of Iranian dominance in the region is immediate.”Developments in Syria have created “a strong imbalance in the region to Iran’s benefit,” Tzuriel told the global gathering of military and defense professionals. “Iran’s strengthening in Syria is an issue that must be addressed right now.”Concern among officials about Iran’s influence – and what is believed to be its goal of forming a land corridor from Tehran to Beirut – has grown.This is particularly true since Iranian-backed Iraqi militias recently reached strategically situated villages on the Syria-Iraq border, which according to Tzuriel is today’s location of greatest urgency.“There is no doubt that Iran has a strategic plan to make a continuous land bridge,” Tzuriel told the Post, and if Tehran succeeds in creating a continuous land bridge from Iran to Lebanon, he said, “it would be a strategic game-changer.”Maj.-Gen. Qassem Soleimani, a senior figure in the Islamic Revolutionary Guard Corps, was photographed on a scouting tour of the northwest Iraqi countryside near the Syrian border.Tzuriel, who served in the Mossad for 28 years, said the presence of Soleimani, a top player in external Iranian operations as well as internal politics, was “a significant” message from Iran.“Having Iran on the Iraq-Syria border is a new chapter,” he said. “We may be entering the final stretch of Islamic State militancy in those countries... but we must then ask ourselves what are we paving the way for? What is the next threat? A mutation of global jihad or Iran, or both?” Tzuriel said the West and Israel must prevent the threat posed by Iran from maturing.“If Iran and Hezbollah manage to base themselves in Syria, it would be a permanent source of instability in the entire region. Even Moscow understands this,” he explained.