Israel worked throughout the day on various different channels to ensure that the stabbing attack of the Israeli security guard would not spiral out of control and poison relations. 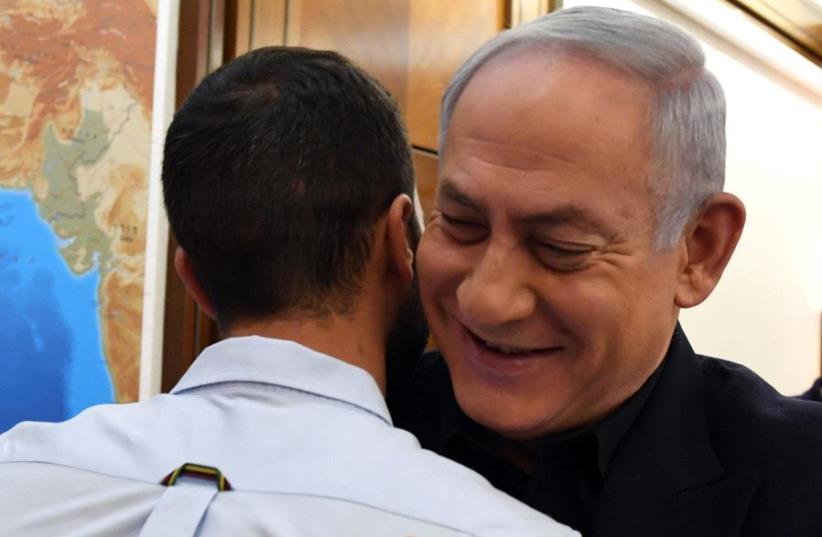 Israeli Prime Minister Benjamin Netanyahu hugs the security guard from the Israeli embassy in Amman Jordan who was stabbed by a terrorist
(photo credit: CHAIM TZACH/GPO)
Advertisement
The Israeli guard stabbed in an attack at the embassy in Jordan on Sunday returned to Israel some 30 hours later with the rest of the embassy staff after a tense day of negotiations between Jerusalem and Amman aimed at defusing a diplomatic crisis.The Prime Minister’s Office released a statement late Monday night saying that the embassy staffers crossed over to Israel via the Allenby Bridge, and their return was made possible due to the close cooperation between Israel and Jordan.Israel worked throughout the day on various different channels to ensure that the stabbing attack of the Israeli security guard at the embassy in Amman that left him lightly wounded and the assailant and another man dead would not spiral out of control and poison relations.The security cabinet met Monday evening to discuss the crisis on the Temple Mount over the installation of metal detectors, amid speculation that the Jordanians would allow the guard to return to Israel as part of a wider deal that would have the metal detectors removed, and less visible – but highly sophisticated – cameras placed in their stead that could determine if someone was carrying weapons or explosives.The Prime Minister’s Office issued a statement saying that contacts between Israel and Jordan have been held “in a cooperative atmosphere.” The statement also said that there was no Jordanian demand to link the return of the guard to Israel with a removal of the metal detectors.Prime Minister Benjamin Netanyahu said Monday at the start of a meeting with visiting Georgian Prime Minister Giorgi Kvirikashvili that he spoke twice overnight with Ambassador to Jordan Einat Schlein and the security guard.“I assured the security guard that we will see to bringing him back to Israel; we have experience in this,” he said. “I told both of them that we are holding ongoing contacts with security and government officials in Amman, on all levels, in order to bring the incident to a close as quickly as possible.”Shin Bet (Israel Security Agency) head Nadav Argaman traveled to Amman early Monday to hold talks with the Jordanians and returned in the afternoon to brief Netanyahu on the discussions. In addition, Jordan’s Ambassador Walid Obeidat met with Foreign Ministry officials in Jerusalem, who asked for his assistance in ending the crisis.The drama began Sunday evening when the guard was stabbed in the stomach with a screwdriver by a worker moving furniture in one of the residences in the embassy compound, in what appeared to be a spillover to Jordan of tensions over the Temple Mount.According to a ministry statement, the guard shot the assailant – identified as Muhammad Zakaria al-Jawawdeh, 17 – in self-defense. Jawawdeh was killed, and another man at the scene – the owner of the compound – was wounded and later succumbed to his wounds.The guard suffered light wounds.After hours of negotiations, during which the story was under censorship in Israel, the Jordanians refused to let the guard be transferred back to Israel.The ministry said that, according to the Vienna Convention, which covers diplomatic relations, the guard has immunity from investigation and arrest. He and the rest of the delegation are currently locked down in the compound, and Israel is not letting the Jordanians question the guard.Justice Minister Ayelet Shaked said on Army Radio: “According to international law, he has complete immunity and needs to be transferred to Israel by the Jordanians, and it is forbidden for them to even question him.”The Jordanian police said two Jordanian workers from a furniture company entered the embassy compound, and the owner of the residence was there at the time.The online edition of Jordanian daily Al Ghad reported that the security guard fired two bullets, after which Jordanian security forces arrived at the area and put it on temporary lockdown.Jordanian police kept an angry crowd that gathered at the embassy after the incident from approaching.In its statement, the Jordanian police said that, after the attack, they sealed the heavily protected embassy, located in an affluent part of the capital, and deployed dozens of antiterrorism gendarmes.The attack at the embassy came just two days after thousands of demonstrators in Amman protested against Israel, chanting slogans such as “How beautiful it is to kill soldiers from Jerusalem.”Netanyahu said that contacts are also being made on other tracks to bring the whole delegation home. He did not elaborate.“We are doing this responsibly and with determination,” said Netanyahu. “This is also the way we are acting in order to ensure security and quiet on the Temple Mount, in the Old City and in Jerusalem as a whole.”Eran Lerman, a former deputy head of the National Security Council and currently associated with the Shalem Academic Center in Jerusalem and the Begin-Sadat Center for Strategic Studies at Bar-Ilan University, said that both Israel and Jordan have an interest in overcoming the current crisis, and that he does not believe this incident would be a negative turning point in the relationship.“The basic interests of both countries are very clear,” he said in a conference call put together by The Israel Project. “We are in a very dangerous region – Israel’s backing for Jordan and Jordan’s cooperation with Israel are vital.”Lerman said a solution needs to be found whereby the Jordanians will receive the results of an impartial investigation of the guard, while the Vienna Convention is not violated and the guard is returned to Israel.“It is not beyond human capacity to design such a solution,” he said. “Looking at the dramatic situation in Syria, with Islamic State on its last legs and the Iranians trying to declare victory, Israel and Jordan have too much common interest in the balance of the region for this to overshadow that commonality.”