Renowned media outlets such as MSNBC, CNN, the BBC and others were all accused of having omitted key facts about the story. 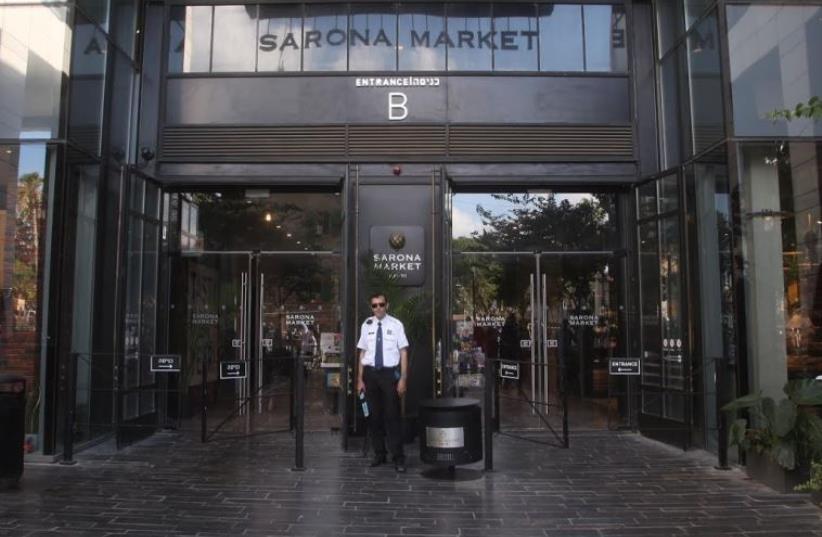 Security gaurd at Tel Aviv's Sarona Market
(photo credit: MARC ISRAEL SELLEM)
Advertisement
Foreign press coverage of the terror attack at the Sarona Market in Tel Aviv on Wednesday night in which four Israelis were gunned down evinced consternation from Israel activists and public diplomacy groups.Renowned media outlets such as MSNBC, CNN, the BBC and others were all accused of having omitted key facts about the story, such as the Palestinian identity of the terrorists, or in some cases for having given credence to arguments justifying terror attacks. One report highlighted for such problems was the live coverage broadcast by MSNBC and its Israel reporter Ayman Mohyeldin, who went on a rambling, 35 second stream of conscious in which he managed to squeeze in four mentions of “the occupation” and three mentions of Israeli politics “shifting to the right’ or the “extreme right,” while talking of Palestinian “frustration” and Israeli oppression. Meanwhile CNN was lambasted for a tweet about the attack in which it put the word terrorists in quotation marks. Eagle-eyed Twitter users responded fiercely alleging that CNN was calling into question whether or not the attackers were terrorists through its use of quotation marks. CNN later deleted the tweet and apologized for it, saying that the shooting “undoubtedly was” and a terror attack.  The BBC was also taken to task for failing to identify the attackers as Palestinians in its initial report, although it subsequently updated its story stating clearly that two Palestinian gunmen had been responsible for the shooting. Meanwhile RT, a television network funded by Russian government, led with a headline mentioning “2 ‘ultra-Orthodox Jewish’ gunmen. The terrorists were dressed in black suits and ties which did lead to initial speculation that they had disguised themselves as haredi men, although this theory was later discounted. In contrast to the dismay generated by the news agencies' misrepresentation of the terror attack, Fox news anchor Greta Van Susteren personally came to Israel's defense when she posted a video "off the record" on her private Facebook page.In the video, Van Susteren shared her condolences with the "innocent Israeli victims" who were at Sarona market last night "just out on a nice summer eve in Tel Aviv."The news anchor added that she hoped that representatives around the world also convey their sorrow and reminded them of Israel's immediate response to help in international crises.