Mourners carry the body of a Palestinian Islamic Jihad militant during his funeral in the central Gaza Strip October 31, 2017
(photo credit: REUTERS)
Advertisement
Iran condemned the "bloodthirsty Zionist regime" of Israel after the IDF destroyed a Hamas terror tunnel on Monday that crossed into Israeli territory.“The blood-thirsty Zionist regime is trying to bend the will of the oppressed people of the occupied territories to guarantee its security by killing Palestinian youths,” said Iranian Foreign Ministry spokesman Bahram Qasemi.“Seven decades of crimes, bloodshed and child-killing could not weaken the determination this patient and courageous people at all,” added Qasemi.According to the Hamas-controlled Gaza Ministry of Health, at least seven Palestinians were killed and nine were wounded as Israel destroyed the tunnel with a series of airstrikes on the Israeli side of the Gaza border. According to the IDF, the destroyed tunnel began in the southern Gaza Strip town of Khan Yunis and continued into Israel, ending only 2 kilometers (about 1.25 miles) from the border community of Kissufim. 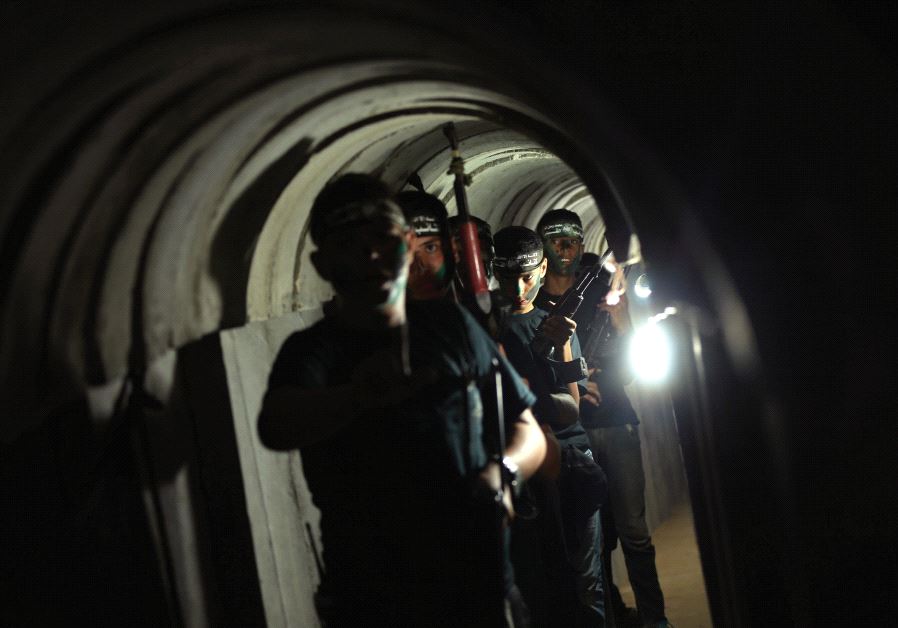 Young Palestinians advance through a tunnel during a military exercise organized by Hamas, east of Gaza City (Reuters)
The IDF spokesman to the Arab press, Avichay Adraee, said that most of the dead "entered the tunnel after it was blown up" as they sought to rescue those trapped inside. The Ministry of Health identified the dead as belonging to both Islamic Jihad, including two senior commanders, and Hamas, adding that the death toll may still rise. Israeli Prime Minister Benjamin Netanyahu vowed to maintain Israel's defensive edge following the strike on the tunnel. “I told you many times that we are developing groundbreaking technology to deal with the tunnel threat,” said Netanyahu. “Today, we detected a tunnel and destroyed it, and we will continue to do so... We will continue to protect Israel’s borders.”“I think the message is clear to all,” said Defense Minister Avigdor Liberman. “We will not tolerate breaches of Israeli sovereignty... This proves that, despite Palestinian unity, the Gaza Strip remains a terrorist kingdom and, for us, there is no doubt Hamas, which controls Gaza, is responsible.”Both Liberman and the IDF Spokesperson's Unit emphasized that Israel is not seeking an escalation with Gaza.
An Israeli soldier patrols the Israeli side of the Israel-Gaza border January 25, 2017. (Reuters/Amir Cohen)
In April 2016, a Hamas tunnel infiltrating into Israeli territory from the Gaza Strip was discovered by the IDF and the Israel Securities Authority. The tunnel, the first to be identified since the conclusion of Israel's 2014 Protective Edge operation, was subsequently neutralized.During Operation Protective Edge, the IDF discovered and neutralized 32 tunnels. Fourteen of the tunnels discovered were found to have crossed into Israeli territory. During the operation, a series of infiltrations through cross-border tunnels by Hamas terrorists killed six IDF soldiers.Earlier this month, the United Nations Relief and Works Agency for Palestinian Refugees in the Near East (UNRWA) announced that it had discovered a tunnel constructed under one of its Gaza schools. The tunnel was subsequently sealed and the school reopened last week. In June, another tunnel was discovered near two UNRWA primary schools.