Ramadan Shalah and his delegation met Supreme Leader Ayatollah Ali Khamenei on Sunday, and have met other Iranian leaders during their current visit. 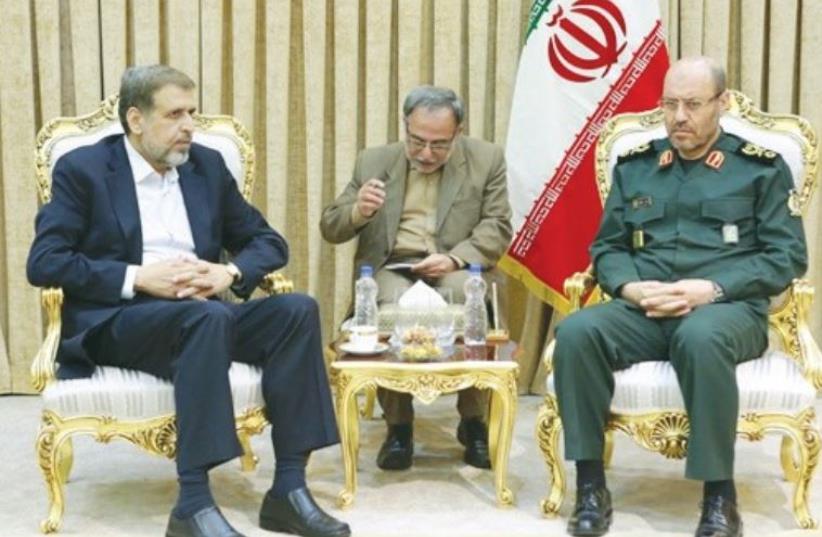 ISLAMIC JIHAD leader Ramadan Shalah (left) meets with Iranian Defense Minister Hossein Dehqan in Tehran on Tuesday
(photo credit: IRANIAN MEDIA)
Advertisement
Iranian Defense Minister Hossein Dehqan pledged support for Palestinians groups that fight against the “Zionist regime,” in a meeting with the head of Islamic Jihad.“The secret of victory over the Zionist regime and the liberation of the Holy al-Quds [Jerusalem] lie in the unity of all Muslims,” Dehqan told Ramadan Shalah in their meeting in Iran on Tuesday, Fars News Agency reported.“The goal of the big powers is to wage war, create turmoil and promote terrorism in the region in a bid to guarantee the security of the Zionist regime and forget the Palestinian cause,” the defense minister said.Shalah and his delegation met Supreme Leader Ayatollah Ali Khamenei on Sunday, and have met other Iranian leaders during their current visit.Khamenei said in that meeting that it has been Iran’s “duty from the beginning” to support the Palestinians.The Revolutionary Guards’ second-in-command, Brig.- Gen. Hossein Salami, was quoted by Fars on Tuesday threatening US vessels that pass through the Strait of Hormuz.Citing international law, Salami said Iran would “decisively confront any menacing passage through the Strait of Hormuz.”“We warn the Americans not to repeat their past mistakes and they should learn from historical realities,” he said.On Wednesday, a senior naval commander said the American presence in the Persian Gulf spreads insecurity.“The US Navy does not pursue anything in the Persian Gulf and the Sea of Oman except causing insecurity, spreading terrorism, espionage and [fomenting] Iranophobia,” charged R.-Adm. Reza Abbasi, according to Tasnim News Agency.He stressed that Iran would stage war games wherever and whenever it deems it necessary to boost its capabilities.Separately on Wednesday, a senior military official accused Israel of preventing the destruction of terrorists in Syria.“Had it not been for Israel’s intelligence backup for the terrorists, the terrorist groups in Syria would have surely been destroyed around two to three years ago,” security adviser of the General Staff of the Iranian Armed Forces Gen. Rastegar- Panah said, Fars reported.Meanwhile, Iranian Deputy Foreign Minister for Arab-African Affairs Hossein Amir-Abdollahian visited Moscow on Wednesday to discuss regional issues.