'Ireland is friend to both Israel and the Palestinians'

Simon Coveney: Because Israel is a democracy, we apply standards that we don’t ask of Arab states. 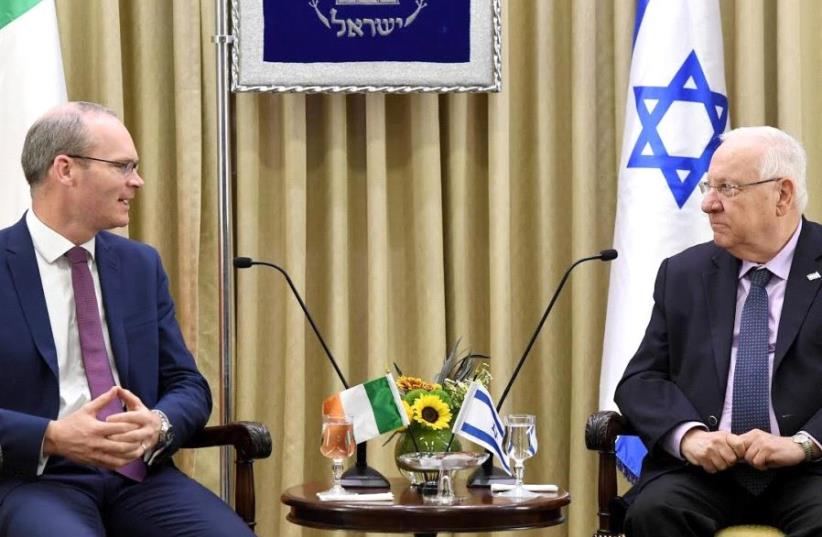 President Rivlin meets with Irish Foreign Minister Simon Coveney
(photo credit: MARC NEYMAN/GPO)
Advertisement
Notwithstanding a number of points of disagreement between Jerusalem and Dublin, Irish Foreign Minister Simon Coveney assured President Reuven Rivlin on Wednesday that Ireland is the friend of both Israel and the Palestinians.Rivlin conceded that “despite differences of opinion,” relations between Ireland and Israel are important, but he made the point that Israel is against boycotts.He was alluding to a statement Coveney’s predecessor in office, Charles Flanagan, made in the Irish parliament in May 2016 that “while the government itself does not support such a policy,” the BDS movement holds a “legitimate political viewpoint” and that the government does “not agree with attempts to demonize those who advocate this policy.”Coveney said that he was aware of “certain impressions” in Israel that Ireland was taking a different position to that of Israel, “but in essence we have the same yearning as Israel for a peaceful future.”Explaining Ireland’s unwavering interest in the Israeli- Palestinian conflict, Coveney said that it was because Ireland had experienced so much violence of its own.“We have had a violent past ourselves, and we see this as one of the great conflicts and divisions in the world, and because we care about this region and want to be helpful.”The proof of that he said lies in the fact that of Ireland’s 600 global peacekeeping troops, “500 are in this region.”He had visited them on the Golan Heights when he was defense minister, he said.Appointed to his present position only a month ago, Coveney said that Israel had been his first destination outside of Europe in his role as foreign minister, though it was his fifth visit to the country.He also made it clear that he intended to make many more visits.In the absence of a new comprehensive peace initiative, Ireland is trying to help in the meantime, he said.He and his delegation had come for all the right reasons, he insisted, and hope to be able to influence from the Irish perspective. He had come to listen carefully to both the Israeli and the Palestinian leadership, he emphasized.Two points raised repeatedly in the discussion between Rivlin and Coveney were from Rivlin’s side the need to build confidence between Israel and the Palestinians; and from Coveney’s perspective the need for new comprehensive peace initiatives.Both men agreed that an imposed peace agreement would serve no purpose.While stating several times that Hamas does not recognize Israel’s right to exist, Rivlin did not rule out the possibility of negotiating with the Islamist movement. In this respect, he said, his attitude was different from that of most Israelis. “I don’t care who I negotiate with; I care what I’m negotiating about,” he declared, adding that while he may dislike his enemies, he nonetheless respects them, because there can be no negotiations without mutual respect. In this context Rivlin said that he had a good relationship with Palestinian Authority President Mahmoud Abbas, to whom he speaks quite often.“I really believe that we can find a way to live together,” he said.Conscious of the fact that Ireland is not in favor of the security barrier that divides Israel from the Palestinians, Rivlin said that it was put up not to cause trouble to the other side, but to protect Israelis.But in the next breath he stated: “It didn’t bring us the peace we were praying for.”Rivlin also said that talk about two states for two peoples doesn’t mean that the Palestinian state will be like the State of Israel. The Palestinians will not have an army or an airport, and the burden of security will be borne by Israel, he said.Rivlin suggested that Ireland could be very helpful in explaining Israel’s attitude to the Palestinians and getting them to understand that is worthwhile for them to resolve their issues with the democratic Jewish state.He had taken it upon himself to bring together Jewish and Arab citizens of Israel, he said, in the hope that if the Palestinians understand that Arabs in Israel have a future, they will realize that it is not so bad to live in coexistence with Israel with open borders and sharing in schools, universities and hi-tech. Rivlin said that he was also trying to convince Jews in Israel that for the Arabs living in the country, “this is also their homeland.” The real problem he continued is that the Arabs tell the Jews that they have no right to live here.Although Rivlin did not mention some of the difficulties that Israel experiences with the EU, Coveney, in an effort to clear the air, said that “because Israel is a democracy, we apply the standards of European democracies and we ask of Israel, what we don’t ask of the Arab states.”While refraining from specifically mentioning the UNESCO position on Jerusalem, Rivlin did say that “no Israeli will accept the idea that Jerusalem is a settlement. It’s like saying that the Irish have no connection with Dublin or with Guinness.”