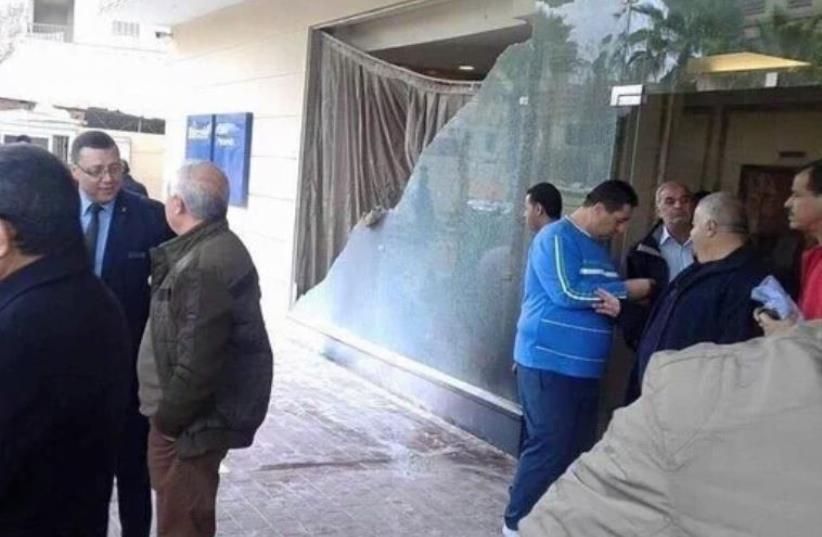 Smashed window after gunmen in Cairo opened fired at a group of tourists boarding a bus‏
(photo credit: ARAB MEDIA)
Advertisement
CAIRO - Islamic State has claimed responsibility for an armed attack on Israeli tourists in Cairo, according to Amaq, a news agency that supports the group.The attack on Thursday, which security sources said targeted a bus meant to transport Israeli Arabs, caused no casualties. Egypt's Interior Ministry said it was directed at security forces.Islamic State said its members carried out the shooting in response to a call by the group's leader Abu Bakr al-Baghdadi to target Jews "everywhere".The group said in a statement released on the internet that light arms were used in the attack.
Bus carrying two Israeli tourists was fired on in Egypt
The shooting took place at the Three Pyramids Hotel, on a road leading to the Giza pyramids southwest of Egypt’s capital.On Thursday, Egypt’s Interior Ministry said the attack was directed at security forces.Joint List MK Ahmad Tibi said in a post on Facebook that 45 tourists from Umm el-Fahm, Kafr Kassem, and Jaffa were on the bus when it was attacked, and that “everyone is alive and well with no injuries.”Egyptian authorities said 15 people who had gathered on a side street near the hotel threw homemade fireworks in the direction of security forces stationed there.“One of the loiterers fired a home-made pellet gun in the direction of the security in front of the hotel, causing some damage to the glass façade of the hotel as well as the window of a tourist bus. No injuries occurred,” an Egyptian statement said.Security forces apprehended one person who was hiding behind the hotel.One gunman was arrested at the scene and security forces surrounded the other attacker in another part of Cairo, security sources said.