Allan: If the "occupation" detains me again, I will stop eating. 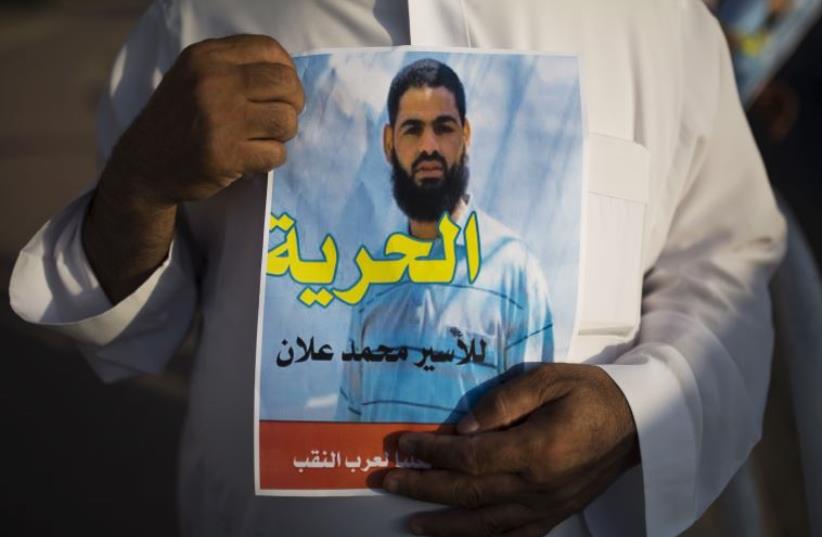 A Beduin demonstrator holds a sign during a protest in the southern town of Rahat, Israel, in support of Islamic Jihad activist Muhammed Allan
(photo credit: REUTERS)
Advertisement
Islamic Jihad activist Muhammad Allan, who ended his hunger strike on Wednesday after the High Court intervened, on Saturday said he might renew his hunger strike if he is arrested again.“I am now released and if the [Israeli] occupation detains me again, then I will return to the hunger strike until they put an end to this tragedy I am going through as are hundreds of administrative prisoners,” Allan told al-Resalah, a Hamas-affiliated website, in a phone interview.He also demanded an immediate end to Israel’s policy of administrative detention.In the court ruling, the justices ruled that due to his poor health, Allan’s family members could visit him without restriction, as if he were not a detainee.Although he is no longer under administrative detention, he would need to go to court if he becomes strong enough to leave the hospital and wishes to go free.MK Yousef Jabareen (Hadash/Joint List) told The Jerusalem Post on Saturday night that Allan is gradually recovering from his more than two-month hunger strike, but it is unclear if he will return to full health.“I talked to his lawyer this morning and they are waiting to hear back about further health tests,” said Jabareen. He said that he was not aware of any other new developments.Rockets hit an Israeli village near the Lebanese border on Thursday, and Israel struck back on the Syrian part of the Golan Heights, saying the salvo had been launched there by Islamic Jihad.The Iranian-backed Islamic Jihad denied the Israeli allegation.Allan ended his fast last week after 66 days, after the High Court ordered him freed from administrative detention due to his worsening medical condition.The fast had meant he needed to be sedated and hooked up to a respirator, amid fears he had suffered brain damage. He is now eating at Barzilai Medical Center in Ashkelon.Allan began his hunger strike after he was placed in administrative detention.He has yet to be charged with a crime.Administrative detention is the arrest of suspects in security crimes who are kept in custody for months at a time – and potentially indefinitely if the order is renewed by a judge – without being charged and without the right to see the evidence against them.In recent years, several Palestinians security suspects have launched hunger strikes to protest the practice. One of the most well-known was Khader Adnan, also a member of Islamic Jihad, who in 2011 went on hunger strike for 66 days.Ben Hartman and Reuters contributed to this report.