The IAF is engaged in a daily, covert effort to “push back the next conflict.” 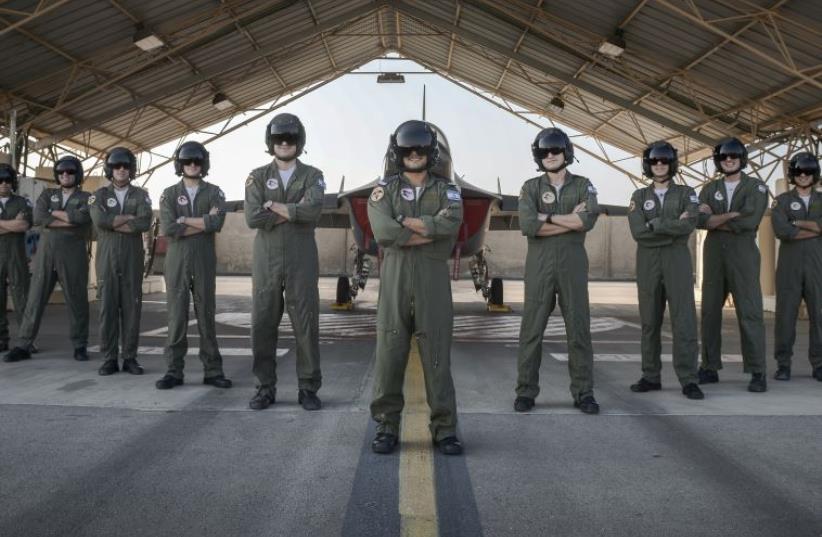 The latest batch of graduating IAF pilots, December 26, 2015.
(photo credit: IDF SPOKESMAN’S UNIT)
Advertisement
The Israel Air Force (IAF) is engaged in a daily, covert effort to “push back the next conflict,” deputy air force chief, Brig.-Gen. Tal Kelman, told a conference in Herzliya on Tuesday.Kelman told the 11th Ilan Ramon International Space Conference that “the IAF is busy, on a daily basis, with a highly intensive series of activities,” which he called “the war between wars,” or a series of stealth activities aimed at trying to delay the outbreak of the next war.However, should a fullscale conflict break out, the IAF would utilize previously unseen capabilities, Kelman told the conference held by the Fisher Institute for Air and Space Strategic Studies.“We have increased the lethality of the air force, to the point that we can strike thousands of targets per 24 hours, anywhere, at any time. We are building the force from the underground level to space.“We cannot build the air force only as an answer to terrorist organizations or as a response to the arms race. Instead, we are preparing for any strategic development and any weapon that could be turned against us,” added Kelman, who heads the IAF’s staff headquarters.The IAF has identified several emerging new challenges in its operational environment, the deputy commander said.He mentioned “the weakening or collapse of nation-states, adding that “the fate of sates that are now stable remains uncertain in the coming years.”Additionally, he warned, “weapons transactions worth hundreds of billions of dollars are occurring in states that surround us. They are being nourished with Eastern and Western weapons and technology, at a very advanced level.“There is a potential here for the erosion of the IDF’s power against its enemies. Fighter jets of the most advanced kinds are being sold to countries that are in Israel’s very close circle.”The IAF is witnessing “a transition from military-to-military conflict to conflict against terror organizations operating in a civilian area.This is a first class military challenge,” he continued.“Iran’s dominance is growing,” Kelman also said. “The nuclear agreement is an excellent opportunity from their perceptive to recover economically. This country supplies resources and weapons that reach the borders of the State of Israel.”The arrival of the first two F-35 fighter jets this year will provide the IAF with fifth-generation air platform capabilities, which Kelman described as “the most advanced in the world.”The jets’ arrival will place the IAF “in a completely new era,” he said.