The communique said the participants reaffirmed “their support for a just, lasting and comprehensive resolution to the Israeli-Palestinian conflict.” Not exactly revolutionary stuff. 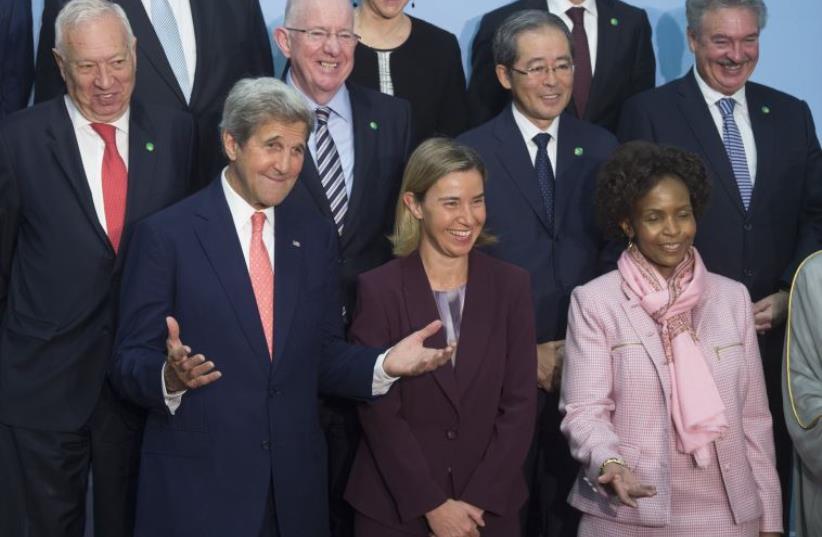 US Secretary of State John Kerry (L), European Union High Representative for Foreign Affairs Federica Mogherini (C) and South African Foreign Minister Maite Nkoana-Mashabane (R) arrive for a family photo during an international and interministerial meeting in a bid to revive the Israeli-Palestinian
(photo credit: SAUL LOEB / AFP)
Advertisement
Israel dodged a bullet on Friday when the much ballyhooed French Middle east summit concluded with a communique that did little more than pledge allegiance to a two-state solution.Oh the fretting that went on before the event: That the conclusions would include a firm deadline for the talks between Israel and the Palestinians, that it would place all the onus of responsibility on Israel, that it would set new parameters for peacemaking.And in the end – thanks largely to US efforts – the communique said the participants reaffirmed “their support for a just, lasting and comprehensive resolution to the Israeli-Palestinian conflict.”Not exactly revolutionary stuff, that.Also not revolutionary nor ground-breaking was the participants’ reaffirmation that “a negotiated two-state solution is the only way to achieve an enduring peace, with two states, Israel and Palestine, living side by side in peace and security.”Yes, the communique mentioned the prospect of an international peace conference, and there is concern in Jerusalem that while Israel is working on efforts to kick-start the diplomatic process under a regional umbrella, the French and their friends are rolling out alternative plans. But still, the fears that the communique would put into motion an effort that would result in the international community imposing a solution on Israel never materialized.The communique also showed something else: Israeli-US ties remain strong, even amid continuous reports that President Barack Obama will use his last months in office to advance parameters of an agreement that may not be to Israel’s liking.The communique that emerged Friday would not have been as neutral and bland as it was without US efforts to water down the language, and Israel was in close coordination with Washington over the last few weeks on this matter.The Obama administration has not hidden its displeasure over the years with Israel’s policies regarding the diplomatic process. But it also understands – though this is less frequently stated or reported – that Israel is not solely responsible for the stalemate, and that the Palestinians also bear much of the responsibility.This came out clearly in the communique. While a French explanatory note on Thursday reflected Paris’s thinking, that the two-state solution was under threat primarily because of the settlements, Friday’s communique added another reason: “continued acts of violence.”For weeks Israel had come out very strongly against the Paris meeting, concerned it would be the beginning of an international effort to gang up and force a solution on Israel.For exactly that same reason, the Palestinians embraced the summit. After the communique, they had little reason to rejoice.