Riham Dawabsha, 26; her husband, Sa’ad; and their 18-month-old son, Ali, were killed in the blaze believed to have been set by Jewish terrorists. 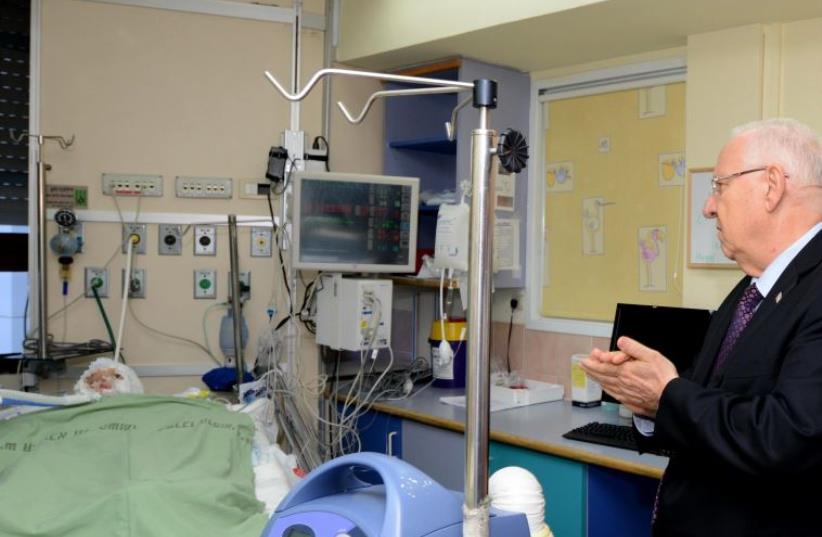 President Reuven Rivlin at the bedside of Ahmed Dawabsha, 4, at Sheba Medical Center in Tel Hashomer
(photo credit: Mark Neiman/GPO)
Advertisement
Israel is denying Palestinian claims that it is seeking NIS 1.9 million in medical bills for the treatment administered to the Dawabsha family, whose home was torched by suspected Jewish arsonists in the West Bank village of Duma.Riham Dawabsha, 26; her husband, Sa’ad; and their 18-month-old son, Ali, were killed in the blaze.The sole surviving member of the Dawabsha family, Ahmed, 4, is recovering from burns at Sheba Medical Center in Tel Hashomer. He was recently given a third skin graft, though medical officials say his condition remains serious.A report in the Palestinian news outlet Ma’an quoted Samir Dawabsha, a relative of the victims in the attack, as saying that the Israeli authorities sent the bill to the Palestinian Health Ministry.“It appears that paying the medical expenses is a more urgent matter [for Israel] than punishing the murderers,” Dawabsha told Ma’an. “Nonetheless, Palestinian Authority President Mahmoud Abbas and the Health Ministry have expressed a willingness to pay the sum.”Dawabsha expressed his view that Israel should assume the financial burden of treating the victims since it was a terrorist attack that was, by all indications, committed by Israelis. He also claimed that Israel deducted the cost of treatment from the tax revenues that the government transfers periodically to the Palestinian Authority as per the terms of the Oslo Accords.The coordinator of government activities in the territories (COGAT), IDF Gen. Yoav Mordechai, issued a statement on Thursday denying the Palestinian claims. Mordechai said that the total cost of the medical treatments given to the Dawabsha family amounted to nearly NIS 2 million, but that Israel never sought reimbursement from the family itself. The COGAT added that Israel initially offered to cover all of the medical costs, including those accrued in treating Ahmed Dawabsha, but that a lawyer for the family refused the government’s offer. Mordechai also denied claims that Israel deducted the costs of treating the Dawabshas from the tax revenues transferred to Ramallah every month.