The Indonesian minister was scheduled to inaugurate the first Indonesian consulate in the Palestinian territories. 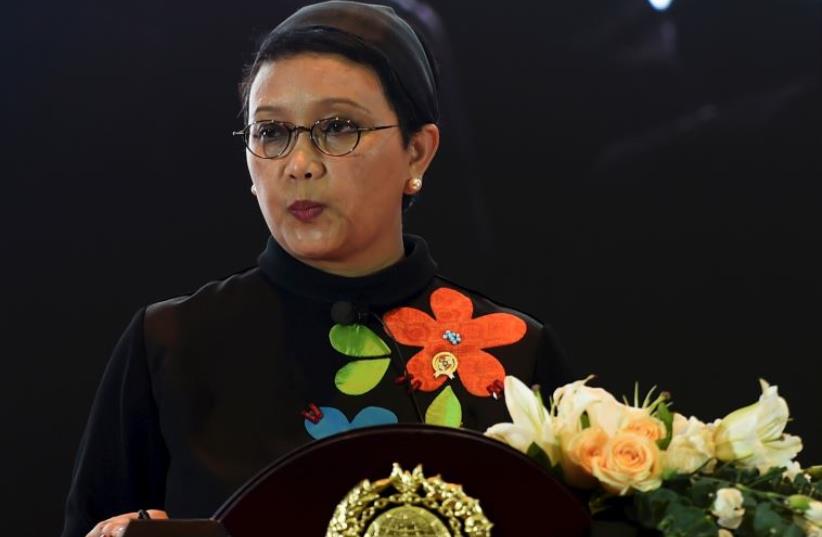 Indonesian Foreign Minister Retno Marsudi
(photo credit: REUTERS)
Advertisement
Israel denied an entry permit to the foreign minister of Indonesia, Retno Marsudi, preventing her from meeting with her Palestinian counterpart Riyad al-Malki in Ramallah as planned on Sunday.The Indonesian minister was also scheduled to inaugurate the first honorary Indonesian consulate in the Palestinian territories.Israel refused to grant Marsudi an entry visa from Jordan to the West Bank because the Indonesian foreign minister had no plans to also meet with Israeli officials.Israel and Indonesia do not have formal diplomatic ties.Instead, Malki traveled to Jordan to meet with Marsudi, according to sources in the PA Foreign Ministry.The sources said that Malki decided to go to Amman “out of appreciation for the historic and special ties between the State of Palestine and Indonesia.”The sources pointed out that Indonesia has been very supportive of Palestinian issues, especially in international forums.Indonesia has long supported Palestinian self-determination outside the context of the two-state solution and first recognized Palestine as a state in 1988.Both former PA chairman Yasser Arafat and PA President Mahmoud Abbas have visited Indonesia. Abbas was in Jakarta just last week to attend the Organization of Islamic States summit on the stalled Israeli-Palestinian peace process.Indonesia has refused to establish diplomatic ties with Israel until the conflict with the Palestinians has been resolved.Just after the Oslo Accords were agreed upon in 1993, former prime minister Yitzhak Rabin visited Jakarta.But no high-level Indonesian diplomat at the level of foreign minister or president has ever made a trip to Israel.The Foreign Ministry and the Prime Minister’s Office had no response to the matter.