Coordinator for government activities in the territories tells Saudi news site that reports Israel agreed to a seaport were false. 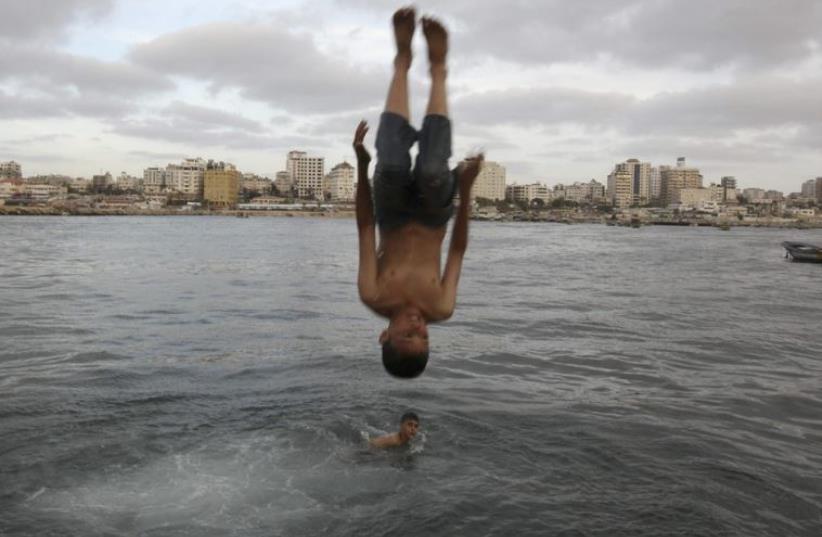 A Palestinian boy jumps into the sea at Gaza Seaport in Gaza City
(photo credit: REUTERS)
Advertisement
The top Israeli official in charge of liaising between the government and the Palestinian territories told a Saudi news site on Friday that there are no discussions between Jerusalem and Ankara on the building of a seaport in the Gaza Strip.Maj.-Gen. Yoav Mordechai, the coordinator of government activities in the territories (COGAT), told Elaph that reports quoting Hamas and Turkish officials to the effect that Israel had agreed to the building of a Gaza seaport were false.Mordechai said that if and when Israel did agree to the construction and operation of a seaport in Gaza, it would only be as part of understandings reached with the Palestinian Authority.Israel recognizes the PA as the autonomous administrative body of the Palestinians by dint of the Oslo Accords, yet there are no official contacts with Hamas, an Islamist group that has refused to recognize Israel's right to exist.Hamas militants removed PA forces loyal to the rival Fatah movement in a 2007 coup in the Gaza Strip. Since then, the territory has been blockaded by both Israel and Egypt.Palestinian Authority officials in Ramallah were perplexed by what they refer to as "Israel's acquiescence to a seaport in Gaza, which is indicative of a rapprochement between Israel and Hamas."Reports of Israel's willingness to discuss the issue have supposedly also raised eyebrows in Cairo, where the Egyptian government has been waging a fierce campaign to root out smuggling tunnels that run underneath the Gaza-Sinai frontier.Egypt has accused Hamas of aiding jihadist elements in the Sinai that have attacked police and military forces.The Saudi news site reported that talks between Israel and Turkey are continuing. Jerusalem is reportedly presenting the Turks with new conditions, including a demand that the government in Ankara expel Hamas officials from the country. Israel is also reportedly refusing Turkey's demand that it ease up on the Gaza blockade.The report states that Turkey has shown greater willingness to compromise with Israel due to its desire to purchase Israeli natural gas.Ismail Haniyeh, the deputy head of the Hamas political bureau, told a rally in Gaza on Friday that the Palestinians would continue to move ahead with "resistance, jihad, and the fighters of the military wing."Haniyeh praised the residents of Rafah for their "heroism and steadfastness," particularly the Izzadin al-Kassam Brigades.Breaking from his custom of talking about the Gaza tunnels, Haniyeh accused Israel of being responsible for the death of a member of the Popular Front for the Liberation of Palestine (PFLP) who was seeking asylum at the Palestinian mission in Bulgaria.