Islamic Jihad operative went on a 65-day hunger strike to protest his being held without charge. 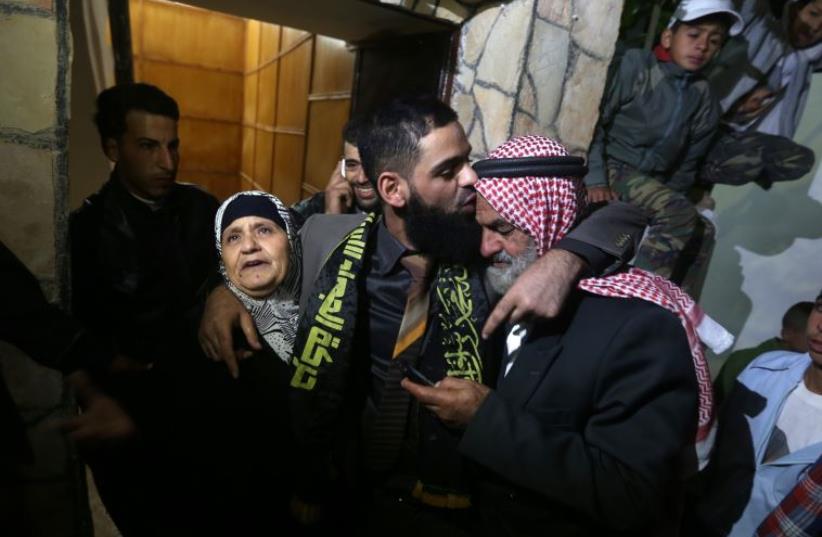 Former Palestinian detainee Mohammed Allan hugs his father and mother at their house in Nablus
(photo credit: JAAFAR ASHTIYEH / AFP)
Advertisement
Israel released Palestinian security prisoner and former hunger striker Muhammad Allan on Wednesday after his term of administrative attention came to end.Allan, a member of Islamic Jihad, had previously gone on a 65-day hunger strike to protest being held without charge. His strike inspired protests and rioting beyond prison walls and made him a cause celebre among Palestinians.After his release from Ofer Prison, Allan accused Israeli authorities of trying to extend his administrative detention, telling Palestinian television channel Al-Fajr that “the Israel Prisons Service transferred me to Hadarim Prison in order to check if I would resume my hunger strike.When I refused to accept the first meal served to me, they understood that I was going back on my hunger strike and decided to release me from detention.”However, Prisons Service spokeswoman Sivan Weitzman said that since ending his hunger strike in August, Allan has not attempted a similar action.Upon being handed over to Palestinian authorities, Allan was taken to a hospital in the West Bank city of Tulkarm for a medical check-up.With the Temple Mount at the center of unrest in recent weeks, Allan said on behalf of Palestinian security prisoners that “the prisoners ask that the Palestinian people be united for al-Aksa Mosque.The message is clear: You are worth nothing if harm is caused to al-Aksa Mosque.”After being arrested in November 2014, Allan was held in administrative detention, by which terrorist suspects are held without charge for renewable six-month periods, usually because the evidence against them cannot be revealed in open court without jeopardizing investigations.Allan launched his hunger strike in June and was hospitalized at Barzilai Medical Center in Ashkelon in August as his protest took a physical toll on him. In late August, the High Court of Justice ordered a suspension of Allan’s administrative detention due to his deteriorating medical condition and the suspicion that his brain had been damaged.The release order allowed Allan’s family to visit him freely, which is not permitted in administrative detention, and suspended his administrative detention while undergoing medical treatment.In September Allan was re-arrested as he exited and he was then taken to Nitzan Prison, where he continued to receive medical treatment.At the time of his re-arrest, the Shin Bet (Israel Security Agency) said that intelligence they gathered indicated that Allan “still presents a danger to public order and the security of the West Bank.”For the past few weeks he has been jailed in Ofer Prison, Weitzman said, where he has been kept under the same conditions as other Palestinian security prisoners.On Wednesday night, Allan was already back in his home village near Nablus, where he thanked Palestinians who supported him and said “their steadfastness gave me strength and proved to the enemy that there are no differences between our people no matter where they are. It proves to them that Haifa is Tulkarm, Jerusalem is Nablus, and Gaza and the West Bank are one body.”Administrative detention has been at the heart of protests by security prisoners and their families on the outside, and has inspired a series of hunger strikes in recent years.Hunger strikes by prisoners typically inspire protests and rioting by Palestinians outside the prison in solidarity.