Tillerson comments on threats from Hezbollah and Syria

"We take the threats to Israel seriously and we take a view that Israel has every right to defend itself from those threats." 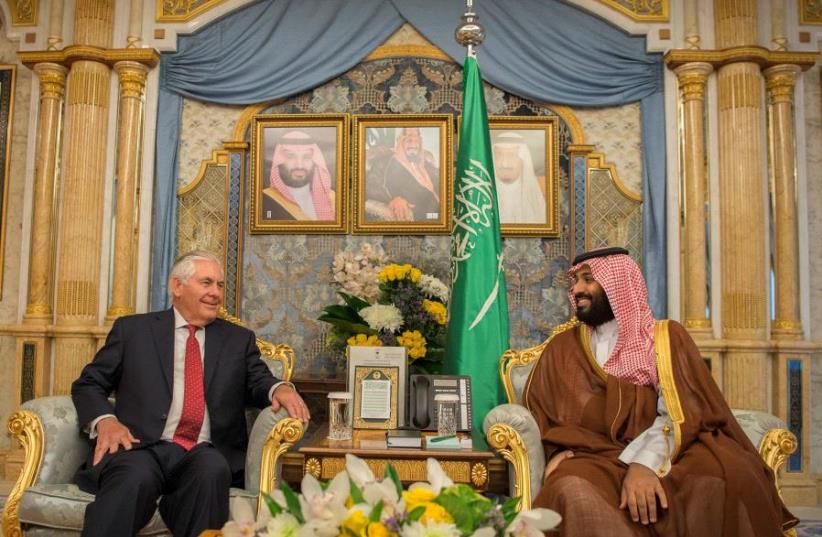 Saudi Crown Prince Mohammed bin Salman meets with US Secretary of State Rex Tillerson in Jeddah, Saudi Arabia July 12, 2017
(photo credit: REUTERS)
Advertisement
KUWAIT - The United States is concerned about Syria creating further opportunities for threats to Israel, Jordan and Turkey, and instability in the region, US Secretary of State Rex Tillerson said on Tuesday.Tillerson, speaking in an interview with Michel Ghandour of Al Hurra TV, commented that the threats Israel is confronted with emanate both from Hezbollah in Lebanon and from Syria."We take the threats to Israel seriously and we take a view that Israel has every right to defend itself from those threats.""We will remain in Syria until ISIS is fully defeated and we are certain will not re-emerge. And we will remain engaged in the political solution for Syria, which we think is the long-term means of bringing stability to Syria and restoring Syria’s independent nature," he emphasized.Asked about the issue of Iran's influence in the region he asserted that the US believes that the future of responding to the Islamic Republic’s influence in Syria is through the political process."We want to use our presence to also be a stabilizing force to support talks in Geneva under the UN Security Council resolution process, allow the Syrian people to write a new constitution, allow them to hold free and fair elections. And through that process, we believe Syria will strengthen its independence and will take its own actions to reduce and ultimately reject the influence of Iran inside of Syria," clarifying that "Iran’s influence inside of Syria is not positive, it is a negative, because they bring with it instability, they bring with it violence.""It is our view – I think it’s the view by and large of the international community – that Iran’s presence in these countries is not helpful. It does not bring stability. It does not bring security to the citizens there. We ask Iran to withdraw and send their forces home, and that’s what we believe is the right pathway for the future."Concerning Russia's role in the conflict, Tillerson commented that the US is encouraging the country to de-escalate the violence."We’ve asked Russia to persuade the regime to stop the march and the campaign against opposition forces. They have agreed to ceasefire areas and stabilization areas, but they need to enforce those in order to create the conditions for a peaceful solution for Syria’s future.""We continue to work with the Russians and with other partners in the region to support the Geneva process."