Israel says the guard fired in self-defense after being stabbed by a screwdriver-wielding Jordanian workman. 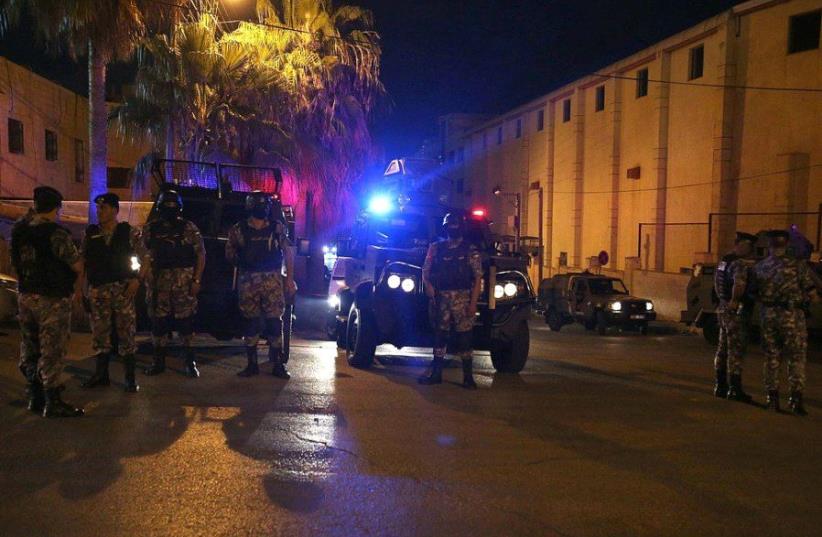 Jordanian police outside Israeli embassy in Amman
(photo credit: SOCIAL MEDIA)
Advertisement
Police will conduct a preliminary investigation into the lethal July 23 shooting of two Jordanians by a guard at Israel’s Amman embassy, whom the kingdom says should face criminal prosecution, the Justice Ministry said on Friday.Attorney-General Avichai Mandelblit on Friday ordered police to “look into” the shooting, the Justice Ministry said in a statement, using terminology signifying a preliminary probe that could be upgraded into a criminal investigation if warranted.“Further along, as findings arise, the option will be considered of asking the Jordanian authorities... to provide additional material to the police,” the ministry said.The Israeli guard at the embassy in Amman was stabbed and consequently shot his attacker and killed him, allegedly accidentally also killing another Jordanian who was present in the apartment.Jordanian authorities initially said there had been an altercation before the shooting, but later described the incident as a double homicide and demanded Israel put the guard on trial.Citing the guard’s diplomatic immunity, the Foreign Ministry repatriated him and other embassy staff after the incident, which stirred up anger in Jordan, where the 1994 peace treaty between the countries is unpopular and pro-Palestinian sentiment widespread.Israel had tried to keep the guard’s identity under wraps, saying he could be targeted for reprisals, but Jordanian newspaper Al-Ghad published his diplomatic accreditation, including his name and photograph.The family of the security guard, who was revealed to be Ziv Moyal, had to leave their home in southern Israel out of safety concerns. Israel filed an official complaint to Jordan as this exposure put Moyal’s safety at risk.Jordan reacted positively to the Israeli moves, but said it expected further “tangible judicial” moves to follow.“We think this is step in the right direction. We expect a complete follow-up on the legal procedure in accordance with international law relevant to these cases. Justice must be served,” Muhammad al-Momani, government spokesman, told Reuters.Israeli officials have said that, as well as the probe into the shootings, they are considering offering compensation to the family of the slain Jordanian bystander – the owner of a property rented out to the embassy.Meanwhile, Jordan’s King Abdullah will visit Palestinian Authority President Mahmoud Abbas in Ramallah on Monday to discuss the recent Temple Mount crisis and the strengthening of the Jordanian-Palestinian relationship regarding the Aksa Mosque, Arab media reported on Saturday.The king is coming to Ramallah, rather than Abbas going to Amman, because Abbas froze the PA ’s security cooperation with Israel and as a result is unable to coordinate security arrangements for a flight to Jordan, as he would need to fly through Israeli airspace.Jordan is the official custodian of al-Aksa Mosque.Since July 14, when three Arab-Israeli terrorists used weapons that had been smuggled onto the Temple Mount to kill two Border Police officers at the nearby Lions’ Gate, fled back onto the Aksa compound and were killed by security personnel there, tensions surrounding access to and sovereignty over the holy site have been especially high.The government decided to follow the recommendation of the police and install new security measures at the compound, including metal detectors at the entrances and security cameras.Abdullah was fiercely opposed to what he considered to be changes to the status quo and the Palestinians responded with mass protests in the streets facing the metal detectors and the security personal stationed there to ensure public order.With the return of the security guard to Israel, where he was received by Prime Minister Benjamin Netanyahu, and the rapid removal of both metal detectors and security cameras, relations between Jordan and Israel improved slightly.However, the embassy of Israel in Jordan remains unstaffed and one-quarter of the Jordanian parliament supported recalling the Jordanian ambassador from Israel.Jerusalem Post Staff and Reuters contributed to this report.