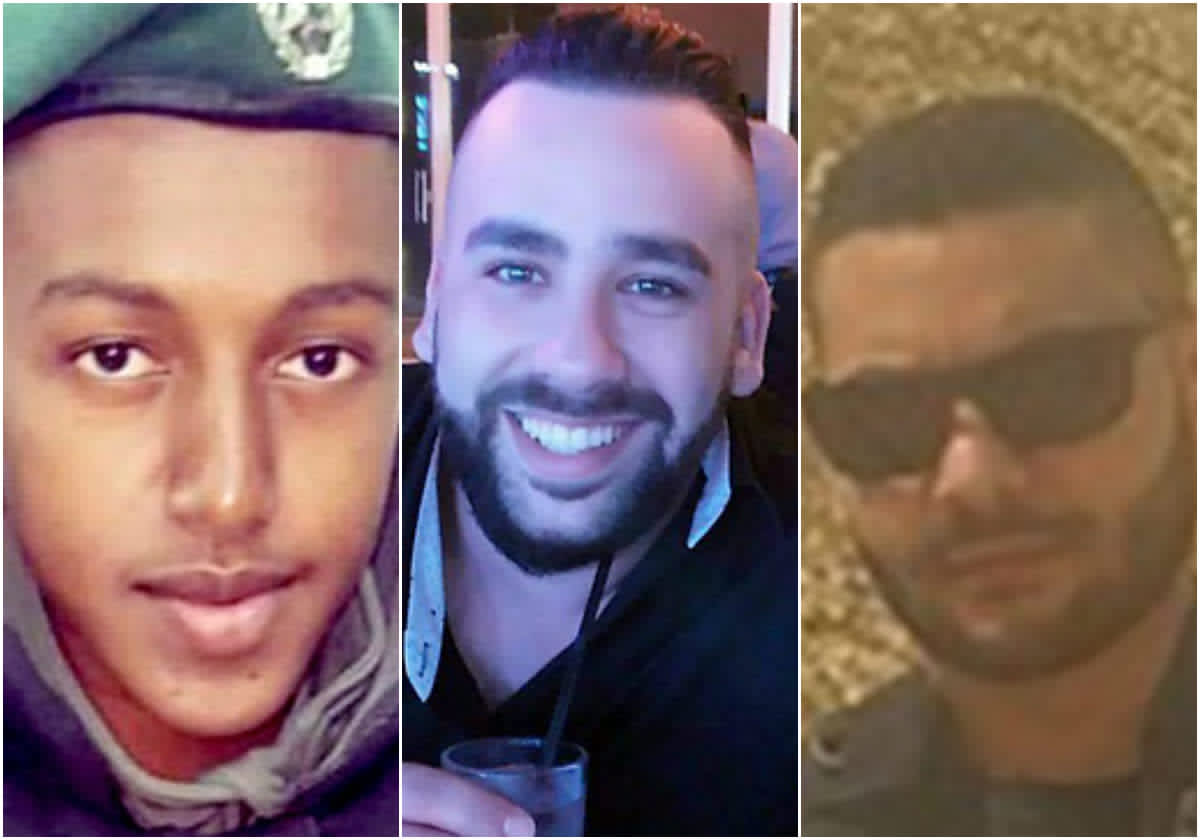 St. Sgt. Solomon Gabaria, Yossef Otman and Or Arish, the victims of the Har Adar West Bank terror shooting, September 26, 2017. (Courtesy Israel Police)
According to police, Gavriya enlisted in the Border Police 18 months ago and was assigned to patrol the greater Jerusalem area. He was stabbed six months later during a terrorist attack while guarding Har Adar’s fence. Despite his injury, Gavriya, whose family immigrated from Ethiopia, insisted on returning to duty two months later. Police spokesman Micky Rosenfeld said Gavriya saved a number of lives by promptly responding to the terrorist’s gunfire, and was posthumously promoted to staff sergeant.Hours after his murder, dozens of Gavriya’s family members and friends gathered at his parents Be’er Yaakov residence to support the mourning family. “He was the salt of the earth; a true patriot,” said Nissim Gozlan, head of the Be’er Yaakov Council.Baruch Bugla, one of the leaders of the city’s Ethiopian community, told YNet Gavriya was “an extraordinarily apt pupil.”“He had a huge heart and was his parents’ firstborn child, brother to a sister who’s also a soldier, [as well as] to two little brothers,” Bugla added.Sarah Adamsu, who knew Gavriya since he was a child, described him as “a special boy” raised by a “humble and special family.” “After the first attack, his family begged him not to go back [to duty], but he loved the service and it was in his blood,” she said. Border Police Superintendent Moshe Davush, commander of the unit Gavriya served in, described him as a humble yet gifted officer and warrior. “He served under me for 18 months and was an exemplary combat soldier who was extremely modest,” said Davush. “Only a year ago, he prevented harm from coming to Jerusalem residents by stopping a terrorist attack with his bare hands,” he continued. “Despite his injuries, he insisted on returning to a combat role in the Jerusalem area.”Gavriya was buried in Be’er Yaakov Tuesday night. Murdered security guard Youssef Ottman’s father, Issam, described his son on Tuesday as altruistic and brave. “He would always help people without hesitation,” his father told YNet. “He was a combat soldier and was discharged with distinction. I wouldn’t wish this on any father, on any man who brought his children up to choose life.”  Issam continued: “The person who murdered him is not a human being.” Dozens of family members and friends also gathered at Arish’s parents' Har Adar home to console them after the sudden loss. According to his family, Arish was assigned to work the evening shift, but requested the morning one as well to save additional money for college. “His mother is crying and is in total disbelief,” a neighbor said Tuesday afternoon. “She cried out that she was about to bury her son. The father is completely shattered. He spoke to him just last night.” Arish’s uncle, Yaakov Hayun, described his nephew as a “charming boy everyone loved,” who opted to pursue a career in security after serving with distinction in the IDF’s paratrooper brigade. “He was a special boy,” said Hayun. “After his release, we tried finding a direction for him in life, and he started a security course and began working in the field several months ago. He was a charming boy everyone loved,” Hayun added. A fourth man who survived the attack has been identified as Har Adar’s security coordinator, Amit Steinhart, 33, who was shot in the shoulder and hip. Steinhart was rushed to Jerusalem’s Hadassah University Medical Center in Ein Kerem in serious condition. A hospital spokesperson said his condition was upgraded to stable following emergency surgery, and he is expected to survive. Police Commissioner Roni Alsheikh praised all four men for acting quickly to neutralize the terrorist before he killed more people in the settlement. “[The killer] could have entered the town and continued his murderous mission,” said Alsheikh.