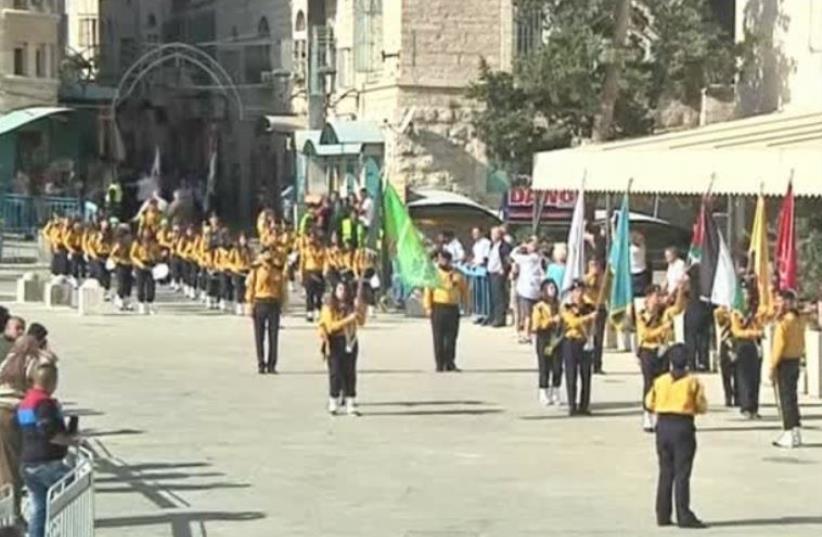 Holy Land Custodian launches Christmas season from Jesus' birthplace Bethlehem
(photo credit: REUTERS)
Advertisement
Tourism Minister Yariv Levin pushed back against plans from earlier this year that Israel would bar tour operators from taking visitors to Palestinian areas of the West Bank.“For many people that are coming to this region, they want to visit Bethlehem. We, of course, don’t prevent it. We give them all the ability to do that,” Levin told The Jerusalem Post on Monday.“We are not preventing anything. But, of course, we give incentives and encourage those who sell Israel, not those who sell other products,” referring to Palestinian tourism efforts.In April, the Interior Ministry sought to discourage tourists from visiting Area A – Palestinian Authority-administered areas of the West Bank – by issuing a directive that would bar Israeli tour companies from taking groups there. The ministry then backtracked days later and retracted the order.To visit the Palestinian territories, tourists must enter through Israeli border crossings or checkpoints. Often, if a tourist says that he or she plans on visiting the West Bank, security agents will interrogate the visitor and sometimes do not allow that individual to enter the country. Levin did not specifically address how visitors were banned from Israel.The number of people refused entry to Israel has skyrocketed to some 16,534 people in 2016, compared to 1,870 in 2011, according to numbers that Haaretz newspaper got from the Population and Immigration Authority.Some of those not issued an entry visa are tourists who specified that they were visiting Palestinian areas.In terms of local tourism, Levin said he preferred for people to stay in Israeli hotels and hostels as opposed to Palestinian-owned venues.“We’re responsible for bringing tourists to Israel, not to other places,” he said.“And I do believe that the overall tourist experience for people staying in Israel is much better regarding every aspect, from nightlife to the quality of service to the personal security.”And when asked if the Boycott, Divestment and Sanctions movement was affecting tourism, Levin said that such activists were having no effect on the country.He also bemoaned how there was no cooperation between Israeli and Palestinian government officials for encouraging tourism.“I think the Palestinians are doing every effort to sabotage tourism to Israel and to the whole region,” he said. “I think that if they would have encouraged their youth and people to stop the violence and stop terror and focus on building their economy, then we would’ve been able to work together. But if they look at people who stab tourists as heroes, then I have nothing to say to them.”Levin had sought to launch a joint-marketing campaign with the Jordanians. Last year, Jordan saw more visitors than Israel, and Levin is seeking to capitalize on that market.The tourism minister also praised the work of the Israeli security services in maintaining a sense of quiet that enables growing numbers of tourists.“Not only in the aspect that we’re the best in fighting terror and that people are coming here and getting back safely,” he said. “Our airports are the safest. And I think Israeli is a very safe place regarding personal security. You can walk in the streets at night without any problem.”