The plan, revealed on Thursday, will cost an estimated $568 million less than previously estimated, according to the report. 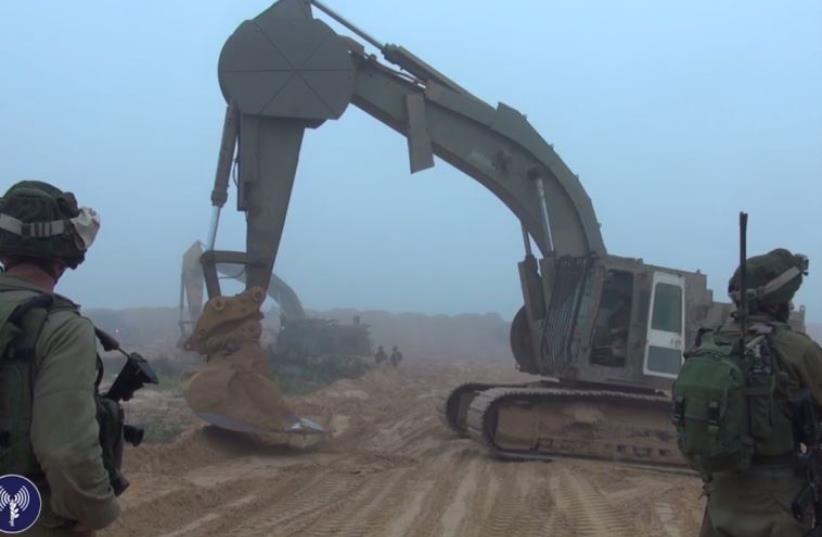 IDF work to find tunnels on Gaza border
(photo credit: IDF SPOKESMAN’S UNIT)
Advertisement
Israel’s defense establishment plans to build a concrete wall that goes tens of yards underground as well as above ground along the Gaza Strip border.The plan, revealed on Thursday on the front page of the Israeli daily newspaper Yediot Aharonot, will cost an estimated $568 million, less than previously estimated, according to the report.A wall that stretches underground is believed necessary to combat the proliferation of attack tunnels running under the border between Gaza and Israel.The existence of the plan to build a wall was cleared for publication in the newspaper by the military censor, Ynet reported.On Wednesday, a senior Defense Ministry official cautioned during a news conference that Israel cannot indefinitely continue a war of attrition and that the next conflict with Hamas in Gaza will be the last. It is not known how this is related to the report of the security wall,“We have no desire to rule over Gaza, and as long as there is no alternative government there, we have no business being there,” said the senior official, who cannot be named. “But on the other hand we cannot conduct a constant war of attrition. Therefore the next conflict has to be the last conflict in terms of Hamas ruling the Strip. We are not looking for an adventure, but a confrontation with Hamas is inevitable. It is an ongoing and growing threat and we need to be prepared for it. ”