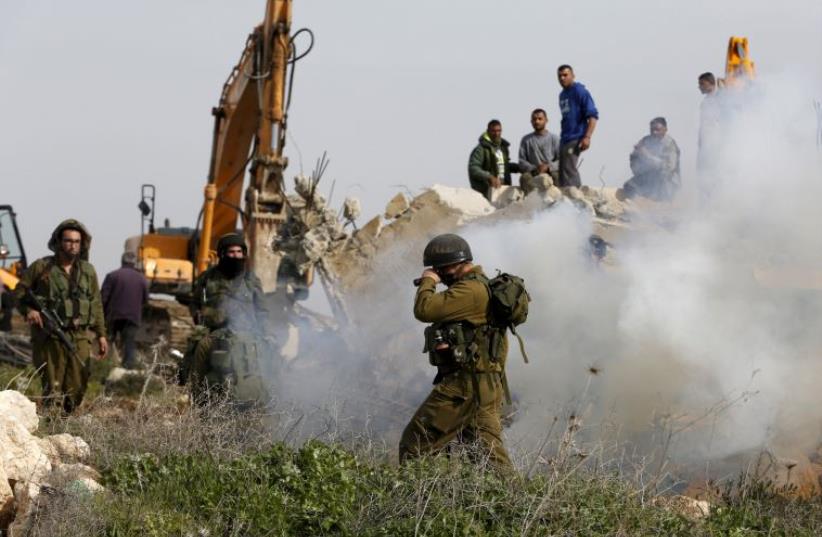 An Israeli soldier reacts to tear gas during the demolition of a Palestinian house at the order of the Israeli army as Palestinians try to stop the demolition in the West Bank village of Biet Ula, west of Hebron January 21, 2016
(photo credit: REUTERS)
Advertisement
The IDF and Civil Administration, secured by Border Police forces, mapped out the home of Amjad Sukkari in the West Bank village of Jami'n, southeast of Kalkilya on Tuesday. Sukkari carried out the the shooting attack on Sunday in which three IDF soldiers were wounded at the Focus checkpoint, near the  Beit El settlement.   His home is scheduled to be demolished, in line with instructions from the government, the IDF said. Two of the soldiers were moderately-to-seriously wounded in the attack Sunday and one was lightly wounded. Soldiers responding at the scene shot and killed Sukkari. Prime Minister Benjamin Netanyahu held the Palestinian Authority accountable for the attack since he said the terrorist was a member of the PA’s security apparatus and received a salary from the PA.Overnight Tuesday, Israeli security forces arrested ten Palestinians suspected of disturbing the peace and attempting to attack Israeli security personnel. In a large operation, that included 150 Border Police officers, arrests were carried out in the Palestinian villages of Abu Dis and Azarya to the east of Jerusalem. Hours before the attack, Sukkari posted a message on his Facebook page in which he indicated his intention to carry out a terrorist attack.“Every day, we hear about a death,” Sukkari wrote, referring to the death of Palestinians who carried out attacks against Israelis.“Forgive me, I might be the next one.”In another post published shortly before the attack, Sukkari quoted from the famous Palestinian poet Mahmoud Darwish: “We have on this Earth what makes life worth living.“Unfortunately, I don’t see anything worth living for as long as the ‘occupation’ is suppressing us and killing our brothers and sisters.”On his way to carrying out the shooting, Sukkari took a “selfie” of himself and posted it on his account together with the sentence: “By God’s will, your morning will be one of victory.”Sukkari, a father of four, was from the village of Jamain, near Nablus. He worked as a bodyguard for the PA prosecutor-general in Ramallah, Ahmed Hanoun.
Photo: Amjad Sukkari
Advertisement
Subscribe for our daily newsletter