An official with the Palestinian Authority’s prisoner affairs committee told Ma’an news agency that Mohammad al-Qiq is likely to be released on Sunday. 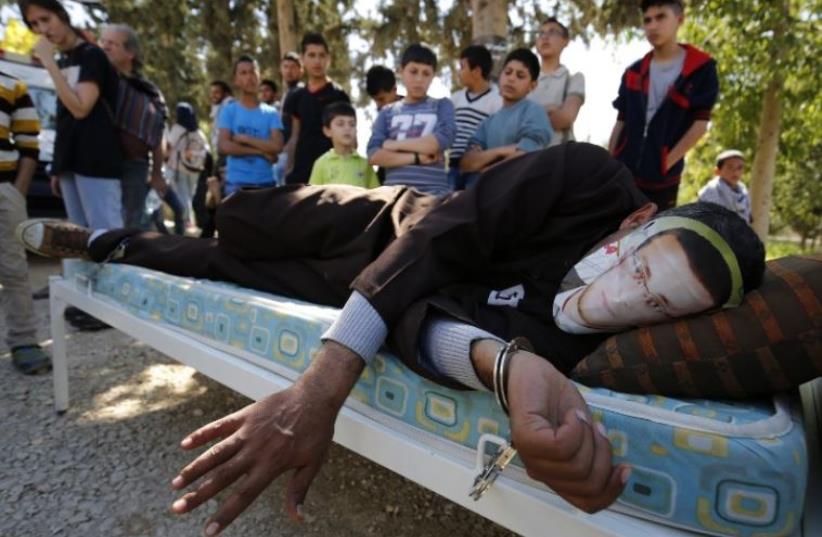 A Palestinian man in Ramallah lies on a bed wears a face covering depicting hunger striking Palestinian journalist Mohammed al-Qiq
(photo credit: AFP PHOTO)
Advertisement
Palestinian officials told local media on Saturday that Israel will soon free Mohammad al-Qiq, the journalist who has been on a hunger strike since being placed in administrative detention three months ago for alleged Hamas-linked activities.An official with the Palestinian Authority’s prisoner affairs committee told Ma’an news agency that Qiq, who is now hospitalized in serious condition at Emek Medical Center in Afula, is likely to be released on Sunday.Qiq, who was detained by Israeli forces in November, is on the 89th day of a hunger strike in a hospital in northern Israel. Doctors say he is becoming weaker by the day, his speech slow and labored and that he is in pain.Israeli and Palestinian officials have been negotiating in recent days to arrange for Qiq’s transfer to a Palestinian hospital.Palestinian government aides told Ma’an that they are hopeful an agreement will be signed no later than Sunday.A Palestinian government minister visited Qiq’s bedside in Afula on Saturday. The minister spoke with Palestinian Prime Minister Rami Hamdallah during his visit, allowing Qiq to hear the conversation between the two men.“The Palestinian government and the PA are making every effort to relocate you to a Palestinian hospital perhaps even by today,” the prime minister told Qiq. Officials are trying to persuade Qiq to agree to be hospitalized at Mokassed Hospital in east Jerusalem. After an initial period of treatment, he would then be released.Israel placed him in what it calls "administrative detention," a practice that has roots in British mandate Palestine. It allows a prisoner to be held for up to 60 days without charge and without viewing evidence against him and can be extended with court approval.The United Nations, EU and rights groups have expressed concern about Qiq, who is refusing any food or medical treatment, and denounced administrative detention. On Thursday UN envoy on Israeli-Palestinian peacemaking Nickolay Mladenov briefed the UN Security Council. "I ... call for all persons subject to administrative detention to be either charged or released immediately," he said.That echoed criticism from the EU in a January statement: "Detainees have the right to be informed about the charges underlying any detention, must be granted access to legal assistance, and be subject to a fair trial." Israel says detention without trial is essential in preventing further violence in cases where there is insufficient evidence to prosecute, or where going to court would risk exposing the identity of secret informants.Qiq is accused of being a member of Islamist group Hamas. The Supreme Court on Wednesday said he is suspected of involvement in militant activity and contacts with Hamas operatives in Gaza. "He is, in short, clearly a Hamas activist involved in militant terrorism," the court said after reviewing classified information. Palestinian officials say the 33-year-old father of two, employed by Saudi-owned Al-Majd Television, is being hounded for political reasons.Reuters contributed to this report.