Israel returns bodies of 2 Arab terrorists, one involved in murder of American tourist

The second terrorist event occurred earlier same day after a Palestinian assailant attempted to kill one Israeli man in the Petak Tikva area. 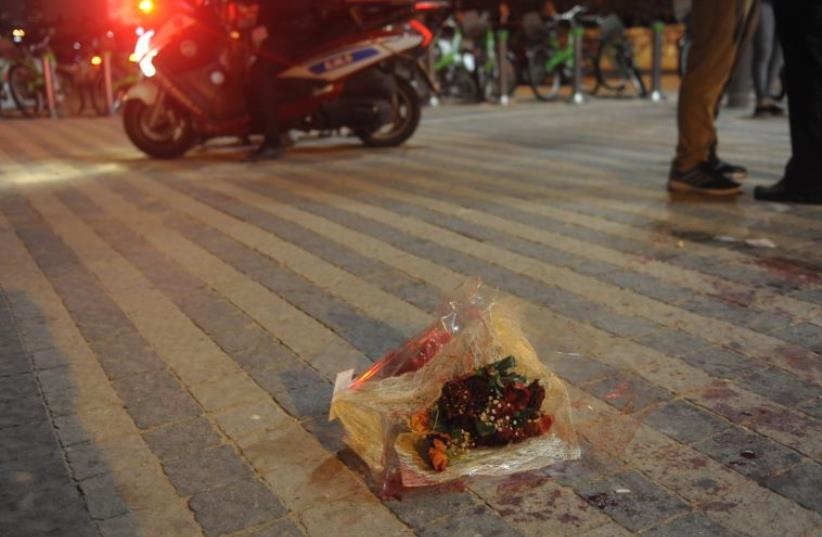 Scene of the Jaffa stabbing attack, Tuesday March 8
(photo credit: AVSHALOM SHOSHANI)
Advertisement
Israeli authorities on Friday returned the bodies of two suspected terrorists to the Palestinian Authority,  Israel Radio reported Saturday morning.Of the two attackers, one was the alleged murderer of an American tourist who was killed on the Jaffa port earlier this year during a manic stabbing spree that left at least 10 others wounded.On March 8, US military veteran and Vanderbilt graduate Taylor Force was fatally wounded by a suspected Palestinian assailant while sightseeing through the ancient port city. Force was immediately evacuated to Wolfson Medical Center in Holon only to succumb to his wounds hours later. Tel Aviv Police said that the attacker began stabbing people near the entrance to the Jaffa Port, wounding a number of people to varying degrees.He then escaped on foot in the direction of Tel Aviv, running between vehicles stopped on the road and stabbing motorists. He managed to wound a number of other civilians before he was shot and subdued by police. According to Force’s LinkedIn profile, he had completed tours of duty with the US military in Iraq and Afghanistan.After graduating from the US Military Academy at West Point in 2009, he served as a field artillery officer until 2014."Taylor was visiting Israel with his classmates in order to expand his understanding of global entrepreneurship and also to share his insights and knowledge with start-ups in Israel," Prime Minister Benjamin Netanyahu wrote in a Facebook post after Force's death was announced. "On behalf of the people of Israel, I send my condolences to Taylor's family and friends. May his memory be a blessing."The second violent event occurred earlier the same day after a Palestinian assailant attempted to kill one Israeli man in the Petak Tikva area. The assailant was also stabbed during the incident, after the haredi victim removed the knife from his neck and stabbed the assailant. The attacker was reported to have died. Magen David Adom paramedics provided initial treatment to the victim, a man thought to be around 35-years-old at the scene, before transferring him to Rabin Medical Center-Beilinson Campus.Ben Hartman, Tovah Lazaroff, Dana Somberg and Yasser Okbi/Maariv HaShavua contributed to this report