Israel steps up effort to block PA activities in Jerusalem

Last week, Jerusalem police raided the offices of a community club in the village of Silwan, where Gheith held a meeting with Fatah activists. 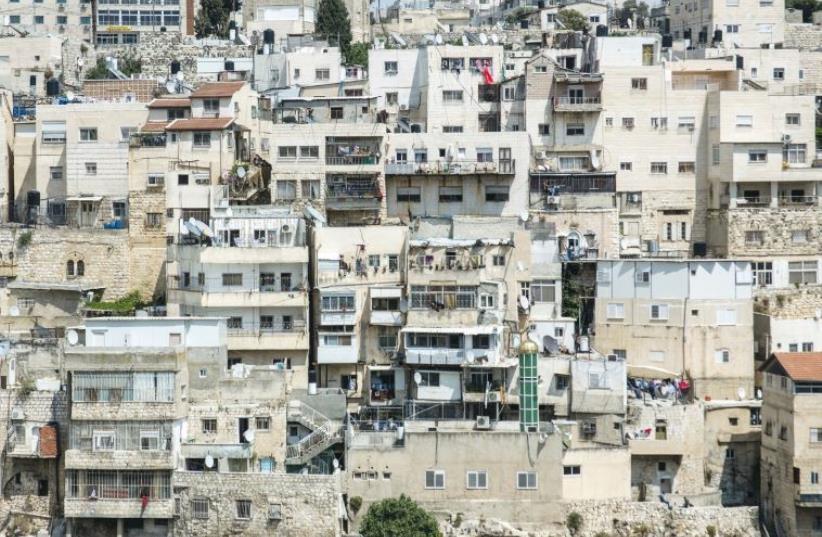 The Haphazard homes in the majority-Arab neighborhood of Silwan
(photo credit: SARAH LEVI)
Advertisement
Israeli security forces on Sunday searched the offices of the PA’s Jerusalem Affairs Ministry in Dahiyat al-Barid, a West Bank village located north of Jerusalem.Palestinians said that IDF soldiers and security officers confiscated many documents and computers. Several employees were summoned for questioning at Jerusalem police headquarters.The raid on the offices of the PA ministry, which also includes the headquarters of the PA “Governorate of Jerusalem,” came in the context of Israel’s efforts to enforce a law that bans the PA from operating inside the country.Israel says that the Palestinians had been acting in violation of the Law for the Implementation of the Agreement on the Gaza Strip and Jericho Area – Restriction on Activity – 1994, which prevents the PA from carrying out political, governmental or similar activity within the area of the State of Israel, including in east Jerusalem.In recent months, however, the PA has increased its activities in east Jerusalem, prompting Israeli authorities, to take a number of measures to combat the phenomenon. The measures include, among other things, the arrest of scores of PA-affiliated activists and officials in east Jerusalem and the ban of dozens of events organized by the PA and other Palestinian political groups.The raid on the PA ministry and “governorate” offices, which are located outside the municipal boundaries of Jerusalem, came in the context of the ongoing efforts to prevent illegal PA activities in Israel, a senior security official told The Jerusalem Post. The decision to search the PA offices was also connected to threats made by Palestinian officials against east Jerusalem residents, who were suspected of involvement in the sale of land to Jews, the official said.

Recently, the Post revealed that the PA had arrested a US citizen from east Jerusalem who was suspected of acting as a mediator in the sale of an Arab-owned house in the Old City of Jerusalem to a Jewish organization. In response, authorities arrested the newly-appointed PA “governor” of Jerusalem, Adnan Gheith, and Jihad Fakih, a senior PA General Intelligence officer, on suspicion that they were involved in the arrest of the Palestinian-American. The two were released less than a week after they were taken into custody.The security official said there was good reason to believe that the PA offices which were targeted this week had been carrying out illegal activities. He said that documents and other material seized inside the compound were now being examined by experts and security officials.Last week, Jerusalem police raided the offices of a community club in the village of Silwan, where Gheith held a meeting with Fatah activists. Gheith and two activists were briefly detained for questioning, in an effort to ban PA activities in the city. Gheith, a senior Fatah official who holds an Israeli ID card was appointed by PA President Mahmoud Abbas as “Governor of Jerusalem” last August. Since then, Gheith has increased his activities among the Arab population of east Jerusalem in violation of the law – a charge that the “governor” has denied.The raid on the PA offices drew strong condemnations from the PA and other Palestinians.“Israel wanted to send us a message that we are not allowed to work inside Jerusalem, but we will not succumb,” said Adnan Husseini, the PA Jerusalem Affairs Minister. “We will continue to work in Jerusalem in order to serve our people.”Gheith also announced that the PA will not stop working in Jerusalem despite security measures. Israel, he claimed, “wants to get rid of everything that is Palestinian in Jerusalem. But Israel will fail because our people are the sovereign power in Jerusalem.”Shadi Mtour, a senior Fatah official in east Jerusalem, told the PA’s Wafa news agency that his faction will continue to target Arab residents suspected of selling property to Jews in spite of Israel’s recent measures.