One battery was stationed near Ashdod and another was positioned not far from Netivot. 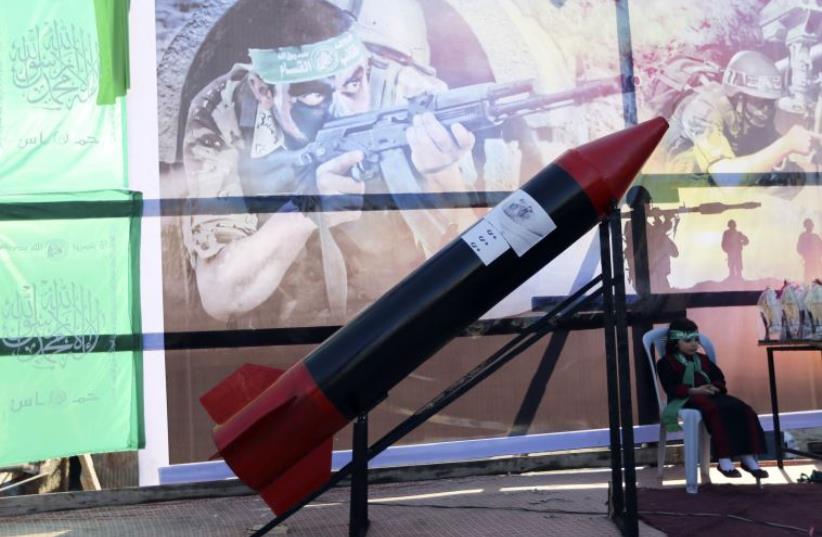 A Palestinian girl sits next to a mock rocket during a rally honoring families of Palestinians who were killed by Israeli forces
(photo credit: REUTERS)
Advertisement
The Israel Defense Forces is taking no chances.Just over a day after the firing of rockets by Palestinians at the Gaza frontier towns, the army deployed anti-rocket Iron Dome interceptors in the South.One battery was stationed near Ashdod and another was positioned not far from Netivot.Defense Minister Moshe Ya’alon on Thursday vowed that Israel will not tolerate any attempts to harm its civilians or allow the return of a reality where rockets trickle into the state.Ya’alon made the remarks after Palestinians in the Gaza Strip fired two rockets into the South on Wednesday.The Israel Air Force struck Hamas targets in the Strip Wednesday night. There were no injuries in the rocket attacks or air strikes.Rocket-warning sirens went off in the Ashkelon and Netivot regions after the two rockets crossed into Israel and exploded in open areas after 11 p.m., security forces said. The two projectiles landed in open fields in Sdot Negev not far from the western Negev town of Netivot.A radical Islamist Salafist group – the Omar Brigades – claimed responsibility for the attack, saying it was in response to Hamas killing an Islamic State supporter.“Even if the shooters last night were jihadist groups rebelling against Hamas by firing at us, we view Hamas as being responsible for everything that occurs in the territory of Gaza,” Ya’alon said Thursday.The IDF said “strikes were confirmed” in its predawn attack that left infrastructure damaged but no casualties.