Often the Israel-Palestinian conflict has resulted in controversies abroad that has put Israel in a difficult position. What follows is the top five incidents in recent decades. 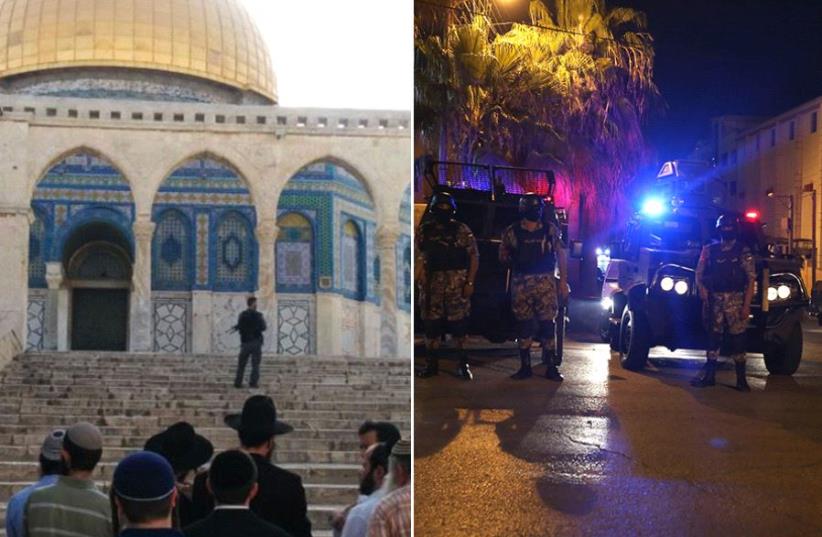 Temple Mount and Israeli embassy in Jordan
(photo credit: KHALIL MAZRAAWI / AFP,ARNON SEGAL)
Advertisement
The current crisis with Jordan after a Jordanian worker stabbed an Israeli security guard at the Israeli Embassy in Amman is not the first time the Jewish state has found itself in a difficult position with foreign countries in the region. The Israel-Palestinian conflict has often resulted in controversies abroad that have put Israel in a difficult position. What follows are the top five incidents in recent decades.The Island of Peace massacre On March 13, 1997, a Jordanian soldier named Ahmad Daqamseh murdered seven Israeli school girls who were on a field trip to the Island of Peace, a joint Israeli-Jordanian tourist resort. The island, which was a symbol of the post-1994 era of Israel-Jordanian peace, is next to Naharayim and is under Jordanian sovereignty but was accessible from Israel. A few days after the murder, the late King Hussein personally apologized for the incident, traveling to Israel to visit and pay his respects to the families of the slain girls. At the time and later, Daqamseh was praised as a hero by some in Jordan.In 2013, 110 of the 120 members of the Jordanian parliament supported a petition to release the perpetrator.He was released in 2017 and cheered upon return to his village.Assassination attempt on Khaled MeshaalOn September 25, 1997, members of what foreign press reports claim to be Mossad, attempted to kill Hamas political bureau chief Khaled Meshaal in Amman. Using Canadian passports and posing as tourists, they sprayed a poison into his ear. However, he didn’t die, and two of the Israelis were detained by Jordanian security. The others fled to the Israeli embassy creating a diplomatic crisis.Prime Minister Benjamin Netanyahu spoke to King Hussein who demanded that in exchange for allowing the Israelis to leave, an antidote must be supplied and Israel must release prisoners. Nine Jordanians and 61 Palestinians, including Hamas cleric Sheikh Ahmed Yassin, were freed by Israel.Assassination of Mahmoud al-Mabhouh On January 19, 2010, Hamas member Mahmoud al-Mabhouh, a co-founder of the Izz ad-Din al Qassam Brigades, was killed in his hotel room in Dubai. Dubai police later released photos of 26 suspects. Reports note that at least six identities of British citizens were used and five other European passports. The killing threatened a diplomatic crisis not only with the countries whose passports were used, but chilled relations with Dubai and the United Arab Emirates, which previously had been warming unofficially to Israel. In recent years, relations have been patched up quietly with the UAE, but the assassination on Emirati soil still remains an issue.‘Mavi Marmara’ raid On May 31, 2010, Israeli naval forces raided a flotilla of ships attempting to break the siege of Gaza. Intercepted in international waters, members of the commando unit Shayetet 13 were attacked when they roped onto the converted Turkish cruise ship the MV Mavi Marmara.The ship was full of hundreds of Turkish activists from the Foundation for Human Rights and Freedoms and Humanitarian Relief. In the melee, eight Turkish nationals and one Turkish-American with US citizenship were killed. A tenth died of his wounds three years later.Turkey withdrew its ambassador and condemned Israel for the “massacre.”In 2013, Prime Minister Benjamin Netanyahu apologized to President Recep Tayyip Erdogan, and in 2016, Israel and Turkey agreed to normalize relations. An estimated $20 million was paid in compensation, according to reports.Attack on Israeli Embassy in Egypt On September 9, 2011, thousands of protesters sacked the Israeli Embassy in Cairo, breaking down a wall and entering the building. The protest and attack came amidst the chaos of the Arab Spring. Six embassy staff were rescued by Egyptian commandos and evacuated from the country. In 2012, an Egyptian court convicted 76 Egyptians for their role in the violence.