Israel to advance plans for over 3,000 settler homes next week

The US State Department under President Donald Trump has continued to chastise Israel for continued building in West Bank settlements. 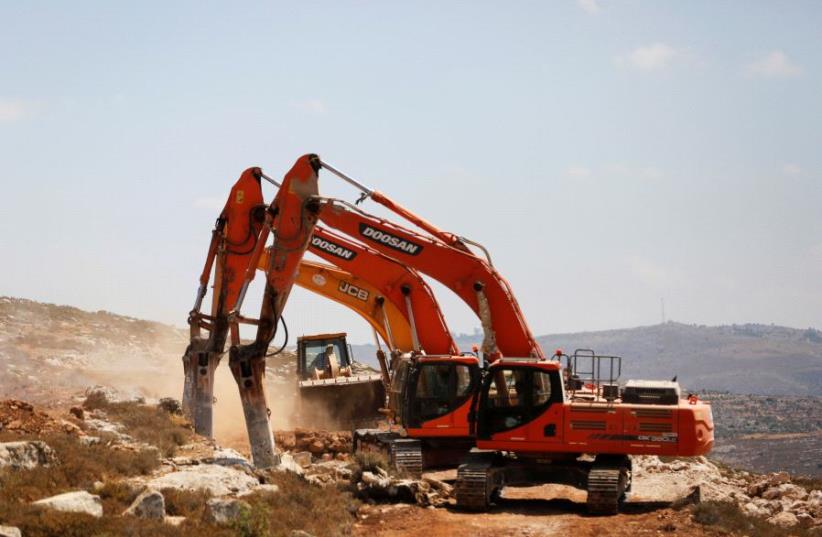 Heavy machinery work on a field as they begin construction work of Amichai, a new settlement which will house some 300 Jewish settlers evicted in February from the settlement of Amona, in the West Bank June 20, 2017.
(photo credit: REUTERS/Ronen Zvulun)
Advertisement
The Higher Planning Council for Judea and Samaria is set to advance more than 3,000 settler homes next Monday and Tuesday when it convenes for the first time since June.Israeli officials confirmed the date after Prime Minister Benjamin Netanyahu came under repeated fire from settler leaders – particularly Samaria Regional Council head Yossi Dagan – who feared the meeting would not take place.“There is no one more concerned about the settlements than Netanyahu and this will be proven next week,” an official said. “All attempts to distort reality are a crude lie.”Channel 2, on Sunday night, estimated that plans for 3,829 housing units would be advanced and published a partial list.This included: 102 for Negohot, 97 for Rehalim, 54 for Har Bracha, 86 for Kochav Ya’acov, 48 Ma’aleh Michmash, 158 for Kfar Etzion, 296 for Beit El, 206 for Tekoa, 129 for Avnei Hefetz and 120 for Nofim.Settler leaders also have argued that Netanyahu must approve new roads and infrastructure projects, as well.Last week, they sent him a signed letter with this demand.Netanyahu and Defense Minister Avigdor Liberman have insisted that they can continue to build in Judea and Samaria, even though US President Donald Trump is engaged in efforts to jump-start a new peace process between Israel and the Palestinians.The US State Department under President Donald Trump has continued to chastise Israel for continued building in West Bank settlements.On Sunday, Dagan, who has been one of Trump’s most ardent supporters in the settlements spoke against the president’s team when addressing a visiting delegation of parliamentarians from 15 countries worldwide who are here as part of the Israel Allies Foundation’s annual Jerusalem Chairman’s Conference.“We are pleased that Trump was elected but not satisfied with the direction that people around him are taking with regard to Judea and Samaria. He [Trump] has unfortunately received misinformation.Help us stop the fantasy in which we are not allowed to build schools and kindergartens in Judea and Samaria.”On Saturday night, Trump spoke about the peace process in an interview on the Trinity Broadcasting Network, a Christian television station. He appeared on a newly launched show hosted by former Arkansas governor Mike Huckabee, whose daughter Sarah Sanders is the White House Press Secretary.“I am very strong on Israel and I want to see if we can make peace. If we can make peace between the Palestinians and Israelis, I think it will lead to peace in the Middle East,” Trump said.“Right now we are actually working on a plan that everyone says will never work because for many years it has never worked,” Trump said.He admitted that it was possible his efforts could come to naught.“Most people say it is an impossible deal, I don’t think it is impossible, I think it is something that can happen. I am not making any predictions, but I want to give that a shot,” he said.