Israel to build new settler homes in Shiloh, despite US objections

US: “This settlement's location deep in the West Bank… would link a string of outposts that effectively divide the West Bank and make the possibility of a viable Palestinian state more remote,” 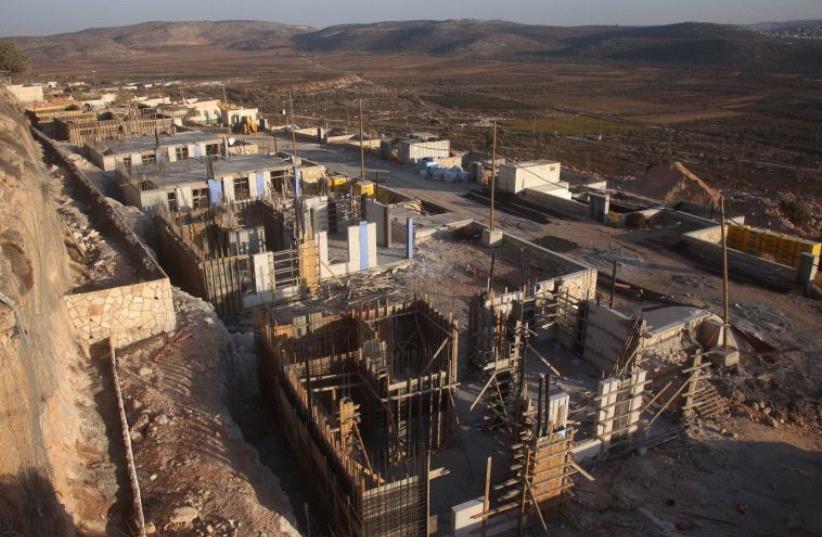 Construction in Shiloh settlement
(photo credit: MARC ISRAEL SELLEM/THE JERUSALEM POST)
Advertisement
Israel intends to move ahead with plans to construct 98 new homes in the West Bank settlement of Shiloh, despite harsh United States objections to the plan.On Monday the state informed the High Court of Justice it awaited final bureaucratic approval to develop the site within six months as a relocation option for the 40 families from the Amona outpost.It, therefore, asked the HCJ to delay by seven months the mandated December 25 demolition of the outpost.Alternatively, the state said, it was also pursuing the option of using the abandoned property law, so that it could relocate the outpost to land adjacent to the community’s current location.Washington has rebuked Israel for both plans, but the State Department issued a particularly sharp statement in which it said the Shiloh project was tantamount to the creation of a new settlement, something Israel had promised the US it would not do.“This settlement's location deep in the West Bank… would link a string of outposts that effectively divide the West Bank and make the possibility of a viable Palestinian state more remote,” the State Department had said.But in its statement to the High Court of Justice, the state said that it wanted to avoid the kind of violent clashes that occurred in 2006 at the outpost between right-wing activists and security forces, during a court mandated demolition of nine homes. It warned that a poorly executed evacuation “could have a security and political impact on the region,” particularly given “the sensitive reality” in which Israel finds itself.“The state wants to prevent the harsh images and results, as well as the injuries, that accompanied the evacuation that occurred there a decade ago,” the prosecutors said, noting that there are 200 children living in the outpost. The Campaign to Save Amona has stated that the families have no intention of leaving of their own volition, and have warned politicians, including Netanyahu, to watch out for their seats in the next election should their community be destroyed.The Amona families have called on Netanyahu to retroactively legalize 2,000 unauthorized homes throughout Judea and Samaria built on private Palestinian property. The bill offers to compensate the Palestinian landowners either financially or with alternative lots.Most members of Netanyahu’s Likud and Bayit Yehudi factions have promised to support that bill.But in a speech to mark the opening session of the Knesset on Monday, Netanyahu hinted that he would not do so, when he told the plenum he intended to demolish the Amona outpost.“I am certain that at the end of the day the [Amona] residents will evacuate responsibly,” he said. “We need to remember that we are a nation of laws.”Netanyahu told the Knesset that there won’t be any other government that would help their enterprise more than his has done.Opposition leader Isaac Herzog, who spoke immediately after Netanyahu, reminded the parliamentarians that the High Court had issued it’s ruling in 2014, thereby giving the state two years to evacuate the outpost residents.He added that the issue was whether a nation of laws would sanction land theft by authorizing 2,000 homes built without permission on private Palestinian property.Politicians can’t argue about the need to comply with law and then try to skirt a court ruling, Herzog said. They can’t speak of the importance of the rule of law, and simultaneously support a bill to retroactively authorize such settler homes throughout the West Bank.“You are talking about an arrangements bill for private property that would harm the principles of justice of a nation of laws,” Herzog said. “That is not an Arrangements bill, it’s a concealment bill without shame.”In its document to the court, the state also spoke of the bill as well as the determination of the Amona families to remain where they are.The prosecutors said they hoped those objections would fall away when it was understood that the entire community would be relocated to permanent homes together at the same new location.The state said that it had begun seeking alternative sites in January 2015, and had weighed sites in the settlements of Ofra, Ma’aleh Mishmash, and Ma’aleh Amona before settling on the possibility of building a new neighborhood in the Shiloh settlement, next to one named Shvuet Rachel.Amona was built in 1995 without permits from the government or the Defense Ministry on private Palestinian property. It received a NIS 2.1 million grant from the Ministry of Housing and Construction.The state’s request to delay the outpost’s evacuation is the latest in a series of delays to an initial court ruling, which was issued in response to a petition by the non-governmental group Yesh Din.It called on the court to reject the petition stating that it was an “insult to the rule of law” and was politically motivated to “evade carrying out the ruling.”"Yesh Din expects the High Court to reject this request swiftly in order to aid the State in directing its efforts to enforcing the law and returning the land in question to its rightful owners, residents of the Palestinian communities of Silwad, Taybeh and Ein Yabrud, as it should be doing,” the group said.