Netanyahu issued the statement at the conclusion of an emergency meeting that was convened following the death of an Israeli national, Alexander Levlovitz. 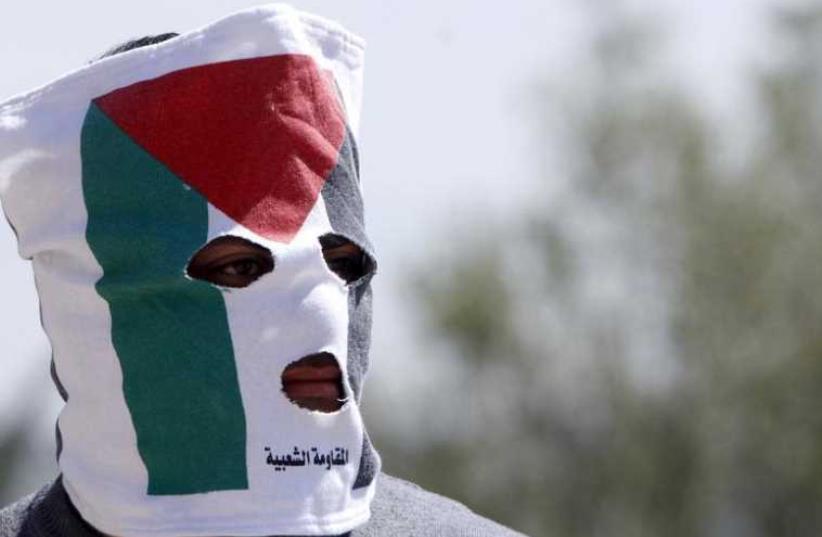 A masked Palestinian protester looks on during clashes with Israeli soldiers following a protest against the near-by Jewish settlement of Qadomem
(photo credit: REUTERS)
Advertisement
Israel's prime minister, Benjamin Netanyahu, vowed late Tuesday "to use all nececessary means" to "combat stonethrowers, those who hurl Molotov cocktails, and those who detonate pipe bombs and shoot fireworks with the aim of doing harm to police and civilians."Netanyahu issued the statement at the conclusion of an emergency meeting that was convened following the death of an Israeli national, Alexander Levlovitz.Levlovitz, 64, was killed in a car accident Sunday night apparently caused by a rock-throwing attack on his car as he was driving in Jerusalem."On the eve of the Jewish new year, we once again saw how throwing stones can kill," Netanyahu said in a statement. "These kinds of activities will be met with a very fierce punitive and deterring response. We will institute a system-wide change and set a new standard of deterrence and prevention."Netanyahu and his cabinet ministers agreed to a number of steps they hope will quell Palestinian rioting that has gradually intensified in recent days.The government resolved late Tuesday to re-examine rules of engagement that determine the extent to which IDF combat troops are permitted to use live fire. It also agreed to establish a minimum punishment that includes heavy monetary fines on parents who permit their children to engage in violent rioting.The premier stressed Israel's commitment to maintaining the status quo on Temple Mount while also vowing to prevent attempts to deny Jews the right to visit there.The comments about the Temple Mount seemed aimed at Jordan's King Abdullah II, who on Monday - during comments to the press made alongside visiting British Prime Minister David Cameron - warned that the situation in Jerusalem threatened relationship between Jordan and Israel.Netanyahu has taken pains over the last two years - whenever there were clashes around the Temple Mount – to stress that Israel has no intention to change the status quo on the Temple Mount."We in Jordan have been very concerned and angered with the recent escalations in Jerusalem, specifically in Al Aqsa Mosque,” Abdullah was quoted as saying by the Petra news agency.“We have gotten reassurances from the Israeli government that this would not happen,” he said, “Unfortunately, these are reassurances we have heard in the past. So, I would like to state, in your presence that if this continues to happen, actually as of today, any more provocations in Jerusalem, will affect the relationship between Jordan and Israel; and Jordan will have no choice, but to take action, unfortunately."According to the government statement, Netanyahu set a date next week to discuss on further implementation of the steps decided late Tuesday.The meeting was attended by Defense Minister Moshe Ya'alon, Public Security Minister Gilad Erdan, Justice Minister Ayelet Shaked, Transportation Minister Yisrael Katz, Jerusalem Mayor Nir Barkat, and senior military and law enforcement officials.