By ANNA AHRONHEIM
FEBRUARY 10, 2018 06:51
Amateur video of the Israeli pilot parachuting after ejecting from his fighter jet (Social Media)
Advertisement
An Iranian drone, which was launched from a Syrian base in the Homs desert, was identified approaching Israeli airspace by the IDF at around 4 a.m. on Saturday, setting off alarms across the Golan Heights and the Jordan Valley.The drone entered Israel via Jordanian airspace, flying for a minute and a half before it was intercepted by an Israel Air Force Apache helicopter near the town of Beit She’an.Brig.-Gen. Tomer Bar, chief of the IAF Staff, the air force’s second in command, said the drone was an advanced model with a low electromagnetic signature that Israel had never intercepted before.“We waited for it to cross into our territory,” he said, stressing that it was important for Israel “to get our hands on the drone.”According to IDF Spokesman Brig.-Gen. Ronen Manelis, while the drone was Iranian and navigated by Iranian operators, Syria’s choice to fire its air defenses against Israeli jets shows that it has chosen to interfere in Israel’s fight against the Islamic Republic’s activity in the country.“Iran’s mask has been removed. It is clear that they are using Syria as a launchpad for activity against Israel,” he said. “Iran is dragging the region into an adventure and will pay the price for it.”In response, Israeli aircraft targeted the drone’s launch site deep inside Syria, in a “complicated surgical strike,” in the face of heavy antiaircraft missile fire.“It was the most extensive Syrian antiaircraft attack since 1982,” Bar said, stressing that, nonetheless, “we consider this to be a fully successful operation. Israel’s air superiority was not affected today.”Two Israeli crew members were wounded after ejecting from their F-16I when they recognized that one of the enemy missiles had locked onto their jet, which then crashed near the entrance to Kibbutz Harduf in the Beit Netofa Valley in the Lower Galilee. The pilots also parachuted inside Israel and were evacuated to Rambam Medical Center in Haifa. The military later cleared for release that one of the crew members was severely wounded while the other one was slightly injured.While it is believed that the F-16 was hit by a Syrian surface-to-air missile, the entire incident is under investigation.It was the first time that Israel lost an aircraft in a combat situation since 2006, when an Israeli Yasur (Sikorsky CH-53) helicopter was shot down over Lebanon, killing the entire five-person crew, including the first female flight mechanic in Israel’s heavy-transport helicopter fleet.Following the crash of the jet, Israel carried out a large-scale attack against 12 targets in Syria, including three Syrian SA-5 and SA-17 air defense batteries and four other Iranian military targets.


According to Syrian media reports, Israel struck the Abu Al-Thaaleb Air Base near the town of Kiswah, which is home to Syria’s First Armored Division and part of the Islamic Republic’s buildup in Syria.The Israeli attack was again met with antiaircraft fire, which triggered air raid sirens on the Golan Heights and in the Upper Galilee. According to Manelis, several enemy missiles hit open areas in northern Israel.“Iran and Syria are playing with fire,” he said. “The results of our strikes are not yet fully known to them [Iran], and they may be surprised when they discover what we targeted.”
Israel’s top military brass and intelligence services held high-level consultations at defense headquarters in Tel Aviv with Prime Minister Benjamin Netanyahu, Defense Minister Avigdor Liberman and members of the security cabinet, briefed on the situation by IDF Chief of Staff Lt.-Gen. Gadi Eisenkot.“The IDF will continue to operate against attempts to infiltrate Israeli airspace and will act with determination to prevent any violations of Israel’s sovereignty,” read an earlier statement by the IDF’s Spokesperson’s Unit. “The IDF is prepared for a variety of scenarios and will continue to act as necessary.” 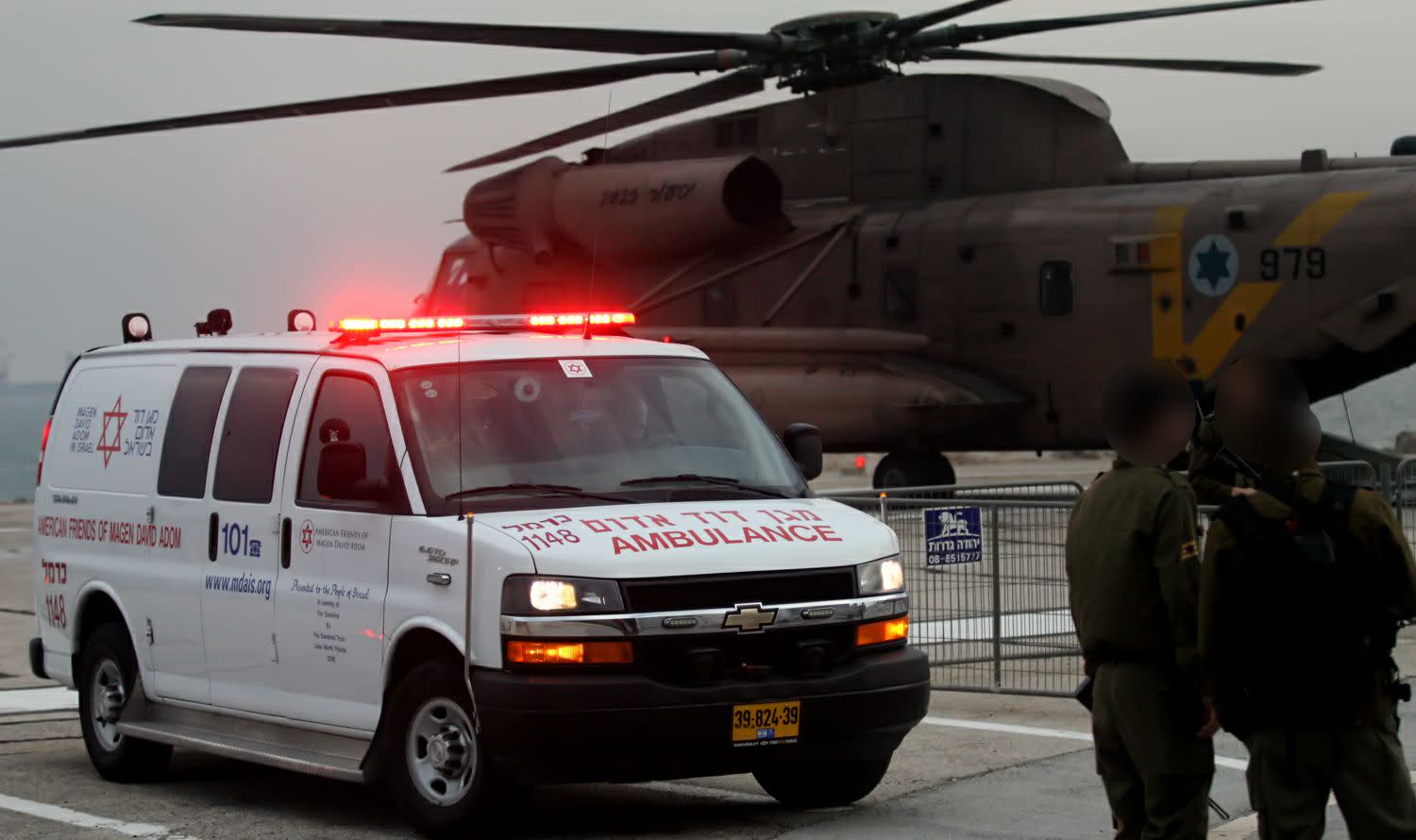 The pilots of the F-16 shot down in northern Israel arrive at Rambam hospital. (SHAI VAKNIN / TPS)Tensions on the northern border have been rising in recent months as Iran entrenches itself deeper into war-torn Syria, with its presence on Israel’s borders growing in strength. The smuggling of sophisticated weaponry and the building a precision-missile factory in Lebanon for Hezbollah has also been a growing concern for Jerusalem.On Thursday, Assad regime forces fired at an IDF drone, with shrapnel hitting a home in the Druse village of Majdal Shams on the Golan Heights.Earlier in the week, Israel was reported to have struck an Iranian base west of Damascus. Syria’s official news agency SANA said Israeli fighter jets flying in Lebanese airspace fired a number of missiles toward the area of the Jamraya research center, targeting an Iranian base. While a number of missiles hit their intended targets, several others were intercepted by Syrian air defenses, the report said.Israel rarely comments on foreign reports of military activity but has publicly admitted to having struck more than 100 Hezbollah convoys and other targets in Syria, with Netanyahu saying that strikes will continue whenever “we have information and operational feasibility.”
Advertisement
Subscribe for our daily newsletter