The campaign was developed as part of a leadership program run by the Kids Creating Peace educational organization. 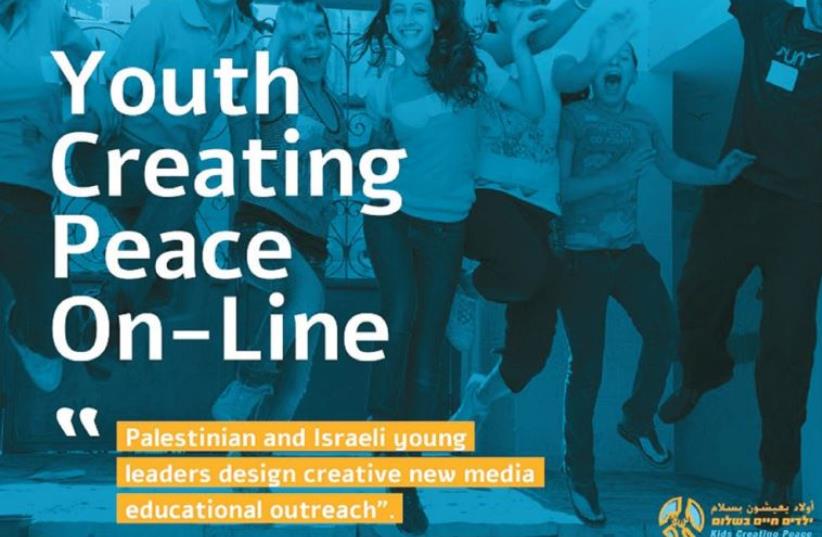 ISRAELI AND PALESTINIAN youth in Jerusalem urge dialogue as a means of overcoming stereotypes
(photo credit: COURTESY KIDS CREATING PEACE)
Advertisement
More than 250 Israeli and Palestinian youth last week opened a social media campaign calling on the public to engage in direct dialogue with one another.The campaign was developed as part of a leadership program run by the Kids Creating Peace educational organization, which brings together Israeli and Palestinian youth to develop a shared dialogue, in partnership with the UK government.“The youth participating in our leadership program meet for a collaborative educational and work process. As part of this process, they discovered completely different things about one another than what they hear in the media and discovered what is similar between them as human beings,” said Shani Peretz-Kariv, CEO of Kids Creating Peace.The campaign launch was the culmination of a year’s worth of meetings between Israeli and Palestinian youth, aged 14-18, who got to know one another by breaking down their stereotypes and developing a dialogue to promote coexistence.“We asked what message they want to pass along to the public, and it seemed that on both sides, the youth characterized what was going on in social media and in news coverage as a polarizer that strengthens false and negative perceptions of both sides,” said Peretz-Kariv.As such, the youth campaign calls on Israelis and Palestinians to use their critical judgment when reading or watching news that may misrepresent, vilify or incite against one side or the other. Instead, the campaign calls to create a direct dialogue to promote coexistence through face to face meetings and through social networks.“The message that the youth want to pass along is that if each Israeli and each Palestinian will meet on a personal level for a direct dialogue, they can break down the walls of hate and turn them into a bridge of hope. The campaign calls on Israelis and Palestinians to peek beyond the wall that the media creates between people and try to develop a direct dialogue between them,” she said.“Before I joined Kids Creating Peace, I was sure that there was no way to talk to the Arab side because they hate us! After three years in the program, where I experienced moments of laughter and tears with my Palestinian friends, I can say that I was able to meet amazing people, who are exactly like me, with dreams and who want to live in peace and without fear. Who knew?” 17-year-old Yarden Ozana from Dimona said.“Maybe in 20 years they will be us, the ministers and even the prime minister of the Israeli government who will lead the change,” she added.James Downer, Deputy Consul-General for the British Consulate in Jerusalem, also spoke at the event.“As part of my job at the British Consulate, I live in east Jerusalem and am involved in the lives of the Palestinians and in their situation. I can say that I am witness to two main things: a sense of injustice which is not new, and a deep and evident sense of hopelessness, which in my distinction is new, or at least, has recently reached new heights that we have not seen in the past,” he said.“There are clear steps that can be made to improve the situation and renew a little hope, but these steps are not being made by those that have the power to do so,” Davner added.