According to the Shin Bet, 35-year-old Enes Haj Yahia, a resident of Taybeh was arrested following intelligence that he was promoting terror activities inside Israel. 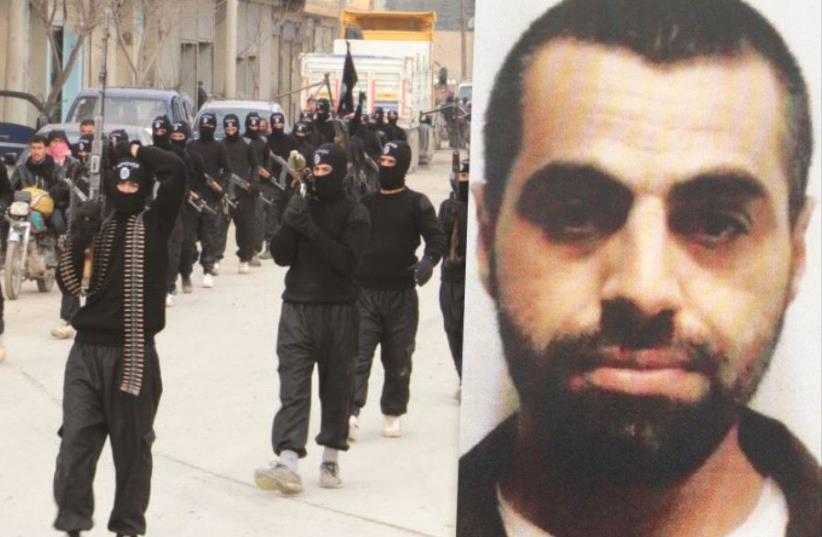 Enes Haj Yahia/ISIS in Syria
(photo credit: SHIN BET/ REUTERS)
Advertisement
Shin Bet (Israel Security Agency) along with the police announced on Monday the recent arrest of an Israeli-Arab citizen on suspicion of planning a terror attack in Israel as well as contacting the Islamic State terror group in Syria.According to the Shin Bet, 35-year-old Enes Haj Yahia, a resident of Taybeh was arrested following intelligence that he was promoting terror activities inside Israel. The suspect was also accused of being in contact with Islamic State militants and distributing material and military knowledge about the preparation of explosives.Yahia is reported to have sworn allegiance to Abu Bakr al-Baghdadi, the self-proclaimed “Caliph” or leader of the jihadist group, and is said to have considered joining the group in Syria.
ISIS video threatens Israel in January 2016
A statement released by the security agency stated that Yahia planned instead to set up a terror cell to carry out attacks in Israel, and even tried to recruit others. According to the Shin Bet, Yahia was asked by the group to carry out a terror attack on a bus in Tel Aviv and harm IDF soldiers, but the plan was never carried out.During investigations, Yahia was found to be a member of several online groups in which Islamic State activists distributed information about the production and assembly of explosive belts, and how to incorporate hazardous substances, including sarin gas, into the devices.During his arrest, images of military materials as well as a “detailed guide of jihadist fighters” used by terrorists affiliated with the Islamic State were seized by security forces.Charges were filed against Yahya on Monday by the Central District Attorney.The Shin Bet sees support for the Islamic State as a “serious security threat to Israel and therefore uses every means at its disposal to prevent threats and bring those involved in this activity to justice,” the agency’s statement read.Israel has so far largely avoided an attack by the Islamic State group, although several Israelis-Arabs have been arrested on suspicion of links with ISIS and plans to carry out attacks inspired by the Sunni extremist group.Israeli security officials have said two Palestinians who shot dead four Israelis at Tel Aviv’s Sarona Market last June and the Israeli-Arab who killed three people in a  2016 New Year's Day shooting spree in Tel Aviv, had all been inspired by the jihadist group.In September, five Israeli-Arabs were sentenced to jail by an Israeli court for terms from 30 months to six years for seeking to join ISIS in Syria.According to the Shin Bet, around 50 Israeli citizens have traveled to Syria or neighboring Iraq to fight with rebel groups including the Islamic State. Several are reported to have been killed and less than a 10 are estimated to have returned to Israel, either by their own accord or after being caught by Turkish authorities while trying to cross the border, leading to their deportation back to Israel.