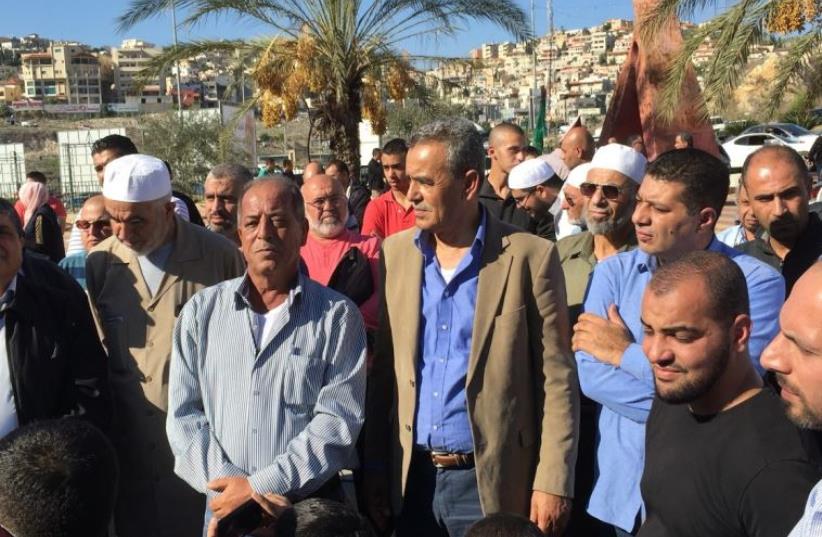 Islamic Movement leader Raed Salah demosntrates in Umm el-Fahm, November 20, 2015
(photo credit: Courtesy)
Advertisement
Joint List MK Jamal Zahalka said Saturday the government decision to ban the northern branch of the Islamic Movement could push Arabs to join more extremist groups.“This is a stupid move because it harms the mainstream Islamic Movement, which will strengthen extremists, and pushes people into the arms of Islamic State,” the Balad party head told The Jerusalem Post Saturday night.“We condemn the ban of the Islamic Movement,” he said, adding, “The decision will harm everyone.”Israeli-Arabs protested the ban in various Arab localities over the weekend.Zahalka took part in a protest on Saturday outside Kafr Kari, south of Haifa. On Friday, he protested in Umm el-Fahm with the northern branch leader Raed Salah.Small protests took place in Nazareth and Rahat on Saturday, Israeli-Arab website Bokra.net reported.Joint List MK Taleb Abu Arar, who is associated with the southern branch of the Islamic Movement’s UAL Party, was shown in pictures at the Rahat protest.The northern and southern branches of the movement are highly integrated into Arab society and have the support of most Muslim citizens.Democracies have a responsibility to defend themselves and are obligated to protect themselves from those who seek to undermine them, Prime Minister Benjamin Netanyahu said Tuesday. He made the comments after the Security Cabinet outlawed the northern branch of the Islamic Movement.The northern branch seeks to undermine Israel, he said, adding that it incites to violence against innocent civilians, cooperates closely with Hamas and seeks to replace Israel with a caliphate.“We have nothing against Islam,” Netanyahu said. “We have nothing against the Muslim citizens of Israel, who enjoy full equal rights, and the vast majority of whom are law abiding citizens. But we will continue to act against inciters, and those who encourage terrorism.”Herb Keinon contributed to this report.