Land Day is held March 30 every year to commemorate the deaths, in the 1976 riots, of six Galilee Arabs over a government decision to confiscate land. 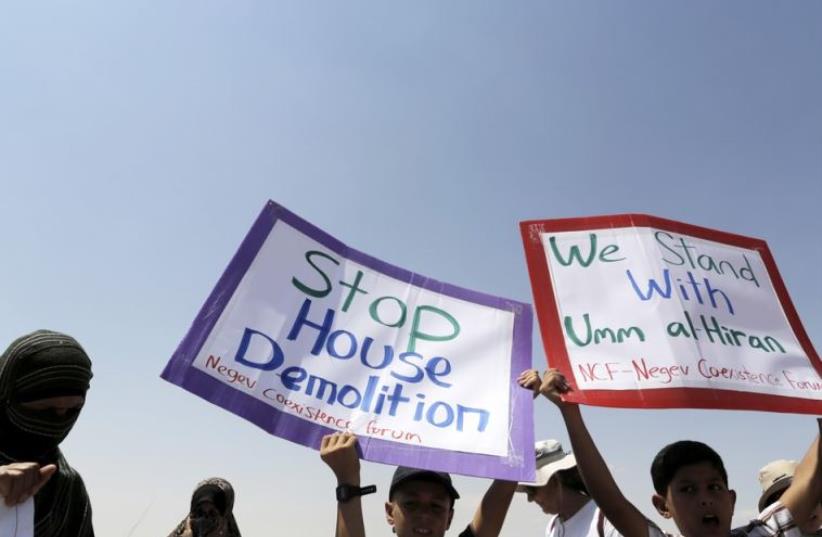 Boys, residents of Umm Al-Hiran, a Beduin village not recognized by the Israeli government, protest against the building of a Jewish community on the land of Umm Al-Hiran
(photo credit: REUTERS)
Advertisement
The Arab Higher Monitoring Committee said Israeli Arabs will protest and hold a general strike on the 40th annual Land Day on Wednesday.The protests, to take place in various Arab localities across the country, would be against government house demolitions and the threat of the evacuation of unrecognized illegal Beduin settlements in the Negev.The main event will be held in the northern town of Arrabe at 4 p.m., with events also taking place earlier in neighboring Sakhnin, Deir Hanna, and Kafr Kana. A separate protest is scheduled to take place at the unrecognized Beduin village of Umm al-Hiran in the Negev at 4 p.m.Land Day is held March 30 every year to commemorate the deaths, in the 1976 riots, of six Galilee Arabs over a government decision to confiscate land.“Land Day comes as incitement and racism against the Arab public is in full force,” Joint List MK Ahmad Tibi told The Jerusalem Post. “There is a new wave of demolitions and worst of all is the decision to demolish the village of Umm al-Hiran and the expulsion of its residents to establish a Jewish settlement in its place."“Prime Minister Benjamin Netanyahu pushes an agenda of hatred and division when I believe that we need to respect differences of opinion and strive for coexistence,” said Tibi, who is expected to attend the protest in the Negev on Wednesday.He also referred to the Joint List’s move to push its agenda to international bodies, which is meant “to show the world the whole picture and not just the biased view coming from the Israeli government.”Joint List MK Haneen Zoabi told the Post, “Since the establishment of the state it has continued to take over our land.”“By using colonial type laws, it has expropriated about 86 percent of our land,” she said, adding that in recent years the struggle has focused on “the attempt to expel tens of thousands of Palestinians from the Negev.”She said the government considers Arabs strangers in their own land.“We don’t have any other way but to struggle,” she declared, adding that the residents in Umm al-Hiran stress that “they will live on the land or die on it.”A knowledgeable source from the Arab sector told the Post that there was a fierce internal battle over where to hold the main event and that the Higher Monitoring Committee pushed for the events to be held in Sakhnin and Arrabe.The committee, which coordinates Arab political action, is made up of Arab MKs, municipal leaders and other community figures and is headed by former Hadash chairman Mohammad Barakeh.However, the source continued, “the younger generation prefers the main protest to be held in the Negev where the biggest fight is going on over the land of the unrecognized Beduin village of Umm al-Hiran, which is threatened with destruction.”The younger generation is more prone to activism and people who have their homes threatened are more emotional, said the source, adding that the battle has pitted communist Hadash against nationalist Balad, with the latter focusing on protests in the Negev.“This is an indication that the Higher Committee is losing legitimacy as people have taken the initiative to hold protests unofficially where they want to and not attend the official ones.”The main event in Arrabe is scheduled at the same time as the Negev protest.Regarding the banned northern branch of the Islamic Movement, the source said it is afraid to do anything and lacks money, making it unable to carry out its usual role of organizing logistics for protests.The government decision to ban the group led to the freezing of many bank accounts affiliated with the group.Netanyahu has defended outlawing the group for acting to undermine Israel, inciting violence, cooperating closely with Hamas and seeking to replace Israel with a caliphate.Herb Keinon contributed to this report.