Tel Sheva man who served as a substitute teacher indicted for allegedly conspiring with Jordanian sheikh. 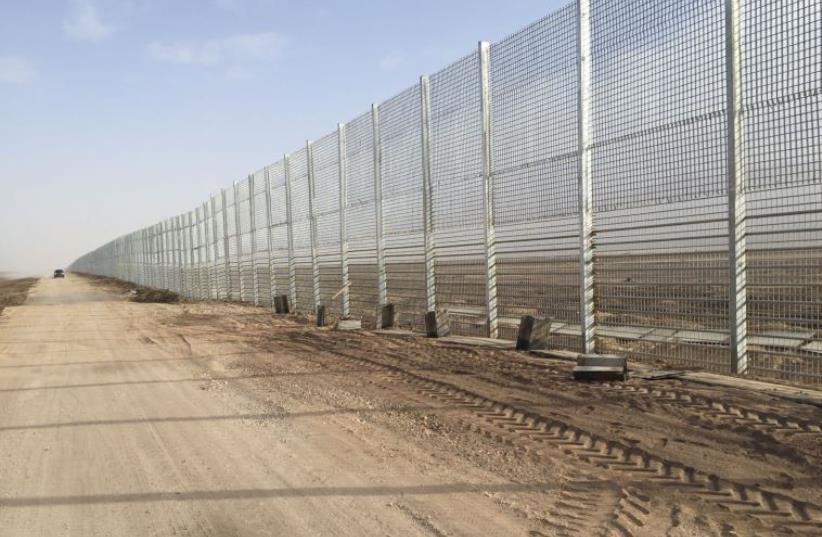 Defense Ministry releases first images of new Jordan border security fence
(photo credit: DEFENSE MINISTRY)
Advertisement
A Israeli Arab man from Tel Sheva, 3 km. east of Beersheba, conspired with a Jordanian sheikh to establish a terrorist cell that would attack soldiers, according to an indictment issued on Monday.Muhammad Alasam, 22, is accused of a number of serious crimes, including conspiracy to assist the enemy in time of war.The case revolves around a series of connections Alasam allegedly made while he was studying Islamic Law at Yarmuk University in Irbid, Jordan. During his studies he met online with a popular lecturer preacher named Sheikh Abdullah Ibn Fahed Alhalusi and later joined a WhatsApp group where the sheikh would post his sermons, the indictment states.Alasam was added to the instant messaging group by a Jordanian man named in the indictment as Abu Saed, who then contacted him privately and let him in on his plan to sneak into Israel and make his way to the Gaza Strip, where he would form an armed cell that would attack IDF soldiers, the indictment continues.Alasam and Abu Saed also allegedly agreed that after Abu Saed entered Israel he would be made the sheikh (cleric) of a Tel Sheva mosque run by Alasam’s family.Alasam, who had previously worked as a substitute teacher at a school in the Beduin town, was arrested while returning to Israel from Jordan on January 18 and the terrorist plot fell through, police said.Before his arrest he allegedly contacted a person in Gaza on behalf of Abu Saed to recruit him to the cell, but decided after looking at the man’s Facebook profile that he wasn’t a solid candidate, the indictment says.Southern District prosecutors on Monday submitted a request to have Alasam kept in custody until the end of proceedings against him: it states that they have a confession from him as well as a number of things that he wrote on WhatsApp and Facebook that indicate his guilt.Also in the South on Monday, prosecutors indicted a resident of the Beduin town of Hura, located northeast of Beersheba and south of Meitar, on charges of conspiracy for allegedly plotting to travel to Syria to join ISIS.The indictment alleges that in early 2014, Najuan Abu Alkyan, 20, began to sympathize with ISIS ideology and began attending a local mosque popular with ISIS supporters, including Othman Abdelkayan, a doctor who had been planning to attend a residency program at Soroka University Medical Center in Beersheba before he left for Syria to join Islamic State in 2014 and was soon killed.The investigation is part of the wider case carried out by the Shin Bet (Israel Security Agency) and the Israel Police over the past year that saw six other suspects – including four school teachers from the Hura area – indicted in July on charges including distributing an illegal organization’s materials, supporting a terrorist organization, conspiracy to commit a crime and illegally exiting the country.