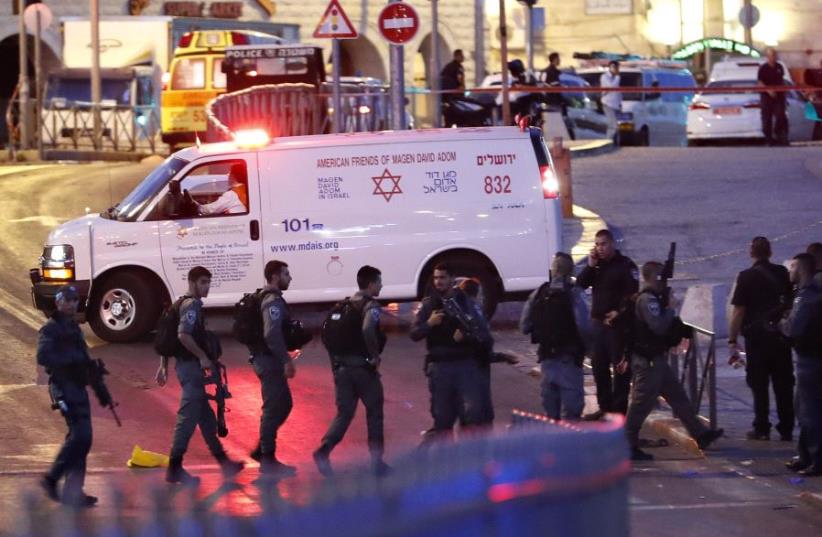 Israeli security forces and an ambulance are seen at the scene of an attack outside Damascus Gate in Jerusalem's Old City on June 16, 2017
(photo credit: THOMAS COEX / AFP)
Advertisement
A Yisrael Beytenu lawmaker has introduced a bill to the Knesset on Monday that would strip Palestinian or Arab terrorists of citizenship and residence.The bill submitted by MK Robert Ilatov was previously proposed by the late Yisrael Beytenu MK David Rotem. Ilatov proposed it again with the encouragement of his party leader, Defense Minister Avigdor Liberman, in response to Friday’s murder of 23-year-old border police officer St.-Sgt.- Maj. Hadas Malka at Jerusalem’s Damascus Gate.
Israeli police react to deadly Jerusalem terror attack, June 17, 2017. (Credit: Israel Police)
Ilatov said Israeli citizens and Jerusalem residency permit holders have become increasingly involved in recent terrorist attacks. He said holding such permits enabled the terrorists to reach their targets in a way that Palestinians could not. He expressed hope that what is being called the “Hadas Malka Bill” could deter similar attacks in the future.“This bill is necessary for our security in order to prevent terrorists from being able to carry out their attacks,” Ilatov said.Ilatov stressed that family members would be given an opportunity to prove to the Interior Ministry that they were not involved in the planning of attacks and be permitted to remain in the country. But he said if terrorists’ family members aided the attacks, there was no reason for Israel to give the socioeconomic benefits, such as welfare payments.“We will no longer permit the absurd situation in which terrorists and their enablers enjoy the perks of being Israeli citizens while working to destroy the country,” Ilatov said.The right-wing organization Im Tirtzu was involved in planning the legislation, which is similar to bills that have been presented in Europe.In March 2016, then-French president François Hollande scrapped plans to strip convicted terrorists with dual nationality of their French passports and deport them. The controversial proposal was to be enshrined in France’s constitution but was opposed by his center-right opposition.